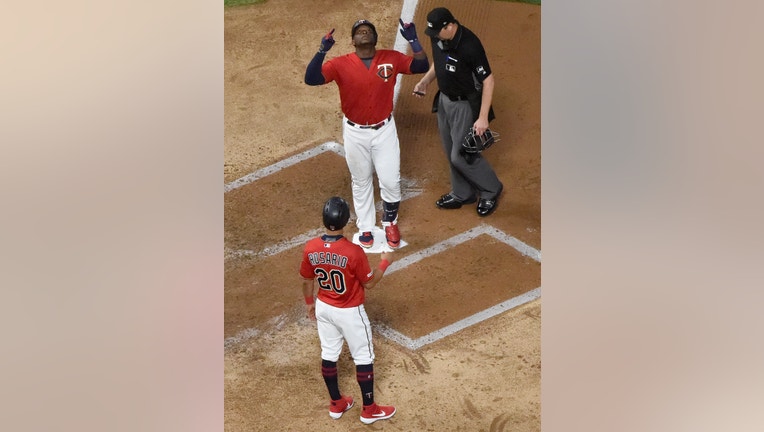 MINNEAPOLIS, MINNESOTA - SEPTEMBER 17: Miguel Sano #22 of the Minnesota Twins celebrates hitting three-run home run against the Chicago White Sox as teammate Eddie Rosario #20 looks on during the third inning of the game at Target Field on September ((Photo by Hannah Foslien/Getty Images))

MINNEAPOLIS (AP) - The Minnesota Twins have set another major league home run record, becoming the first team in history to have five players go deep 30 or more times in one season.

Miguel Sano gave the Twins the all-time mark with his 30th homer, a three-run shot to the third deck in left field off Chicago White Sox left-hander Ross Detwiler on Tuesday night. Nelson Cruz (37), Max Kepler (36), Eddie Rosario (31) and Mitch Garver (30) all made it before Sano.

The Twins earlier broke the single-season major league home run record, set last year at 267 by the New York Yankees. The homer by Sano gave the Twins 289 for the season.

According to Twins records, the homer by Sano was estimated at 482 feet, the second-longest in Target Field history. Jim Thome hit one for the Twins pegged at 490 feet on July 17, 2011.