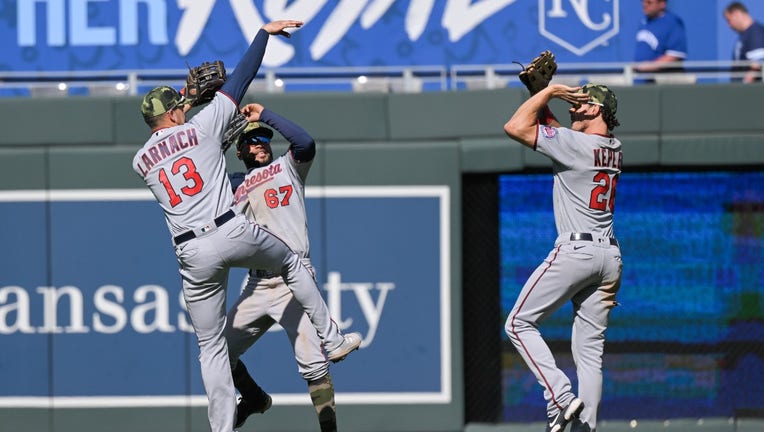 Outfielders Trevor Larnach #13, Gilberto Celestino #67 and Max Kepler #26 of the Minnesota Twins celebrate after their 7-6 win over the Kansas City Royals at Kauffman Stadium on May 22, 2022 in Kansas City, Missouri.  ((Photo by Reed Hoffmann/Getty Images))

MINNEAPOLIS - On the surface, the Minnesota Twins beating the Kansas City Royals 7-6 on Sunday to head home with a series sweep is just another win in a 162-game season.

The win was Minnesota’s fourth straight, and capped a 5-1 road trip after the Twins took two of three at Oakland last week. It was the way the Twins won that could have the attention of Minnesota sports fans for most of the summer, at least until we get closer to football season.

The Minnesota Twins return home after a weekend sweep at Kansas City, have won four straight and have a 4-game lead over the Chicago White Sox in the American League Central Division.

Trailing 6-0 going into the eighth inning, the Twins rallied for five runs to give themselves a chance. They got run-scoring hits from Jorge Polanco and Max Kepler, a sacrifice fly from Gary Sanchez and a two-run homer from Kyle Garlick.

The Twins tied the game 6-6 in the ninth on a Sanchez sacrifice fly, then took the lead on Gio Urshela’s run-scoring single.

"It's an enormous hit," Twins manager Rocco Baldelli said. "We had a lot of good at-bats, but someone has to get up there in that moment and actually get it done, and it's not that easy to do."

Sunday marked the Twins’ fourth series sweep of the season 41 games in. They had just three sweeps of three-games series total in 2021, a year where they won just 73 games. It was also their first series sweep in Kansas City in 11 years.

The Twins have won six of their past seven and after a 4-8 start, they're 21-8 since April 21. That ties with Houston for the second-most wins in baseball since that date.

One of the biggest reasons for the Twins' early success? Utility infielder Luis Arraez. He collected three hits Sunday, and is hitting .336 with five doubles, 11 RBI and has scored 16 runs in 33 games. In his last four games, Arraez is hitting .500 with eight hits, 4 RBI, has scored eight runs and has a .687 on base percentage. In 108 at-bats, he has 18 walks and just eight strikeouts.

The Twins return to Target Field for a seven-game home stand at 25-16. They have the third-best record in the American League behind the New York Yankees and Houston Astros, lead the AL Central by four games over the Chicago White Sox and are 7-3 in their last 10 games.

It's late May and there’s still a ton of baseball left to play, but this week represents a chance for the Twins to widen their lead in the AL Central. The Twins host the Detroit Tigers for three games starting Monday night, and the Royals for four games starting Thursday night. The Tigers and Royals are each 14-26, 10.5 games behind the Twins in the division.

The White Sox host the Red Sox for a three-game series, starting Tuesday night. The Twins are nine games above .500 in late May, and have a comfortable lead in the AL Central. If nothing else, they’ve earned relevant baseball at Target Field for a majority of the summer.

It’s been an eventful few weeks around the team, between Byron Buxton, Royce Lewis and Chris Paddack. Buxton and the team defended a decision to rest their star outfielder as part of a plan to play him at least 100 games this season. Lewis made his big league debut to replace Carlos Correa, then hit over .300 with a pair of homers, including a grand slam for his first major league homers. He was sent down to Class AAA St. Paul to make room for Correa’s return from injury, when many felt they should’ve found a way to keep him in the big leagues.

Paddack came to the Twins in a trade that sent reliever Taylor Rogers to San Diego. His season ended after five starts, needing Tommy John surgery. Regardless, the Twins are 25-16, lead the division and can give themselves breathing room this week.