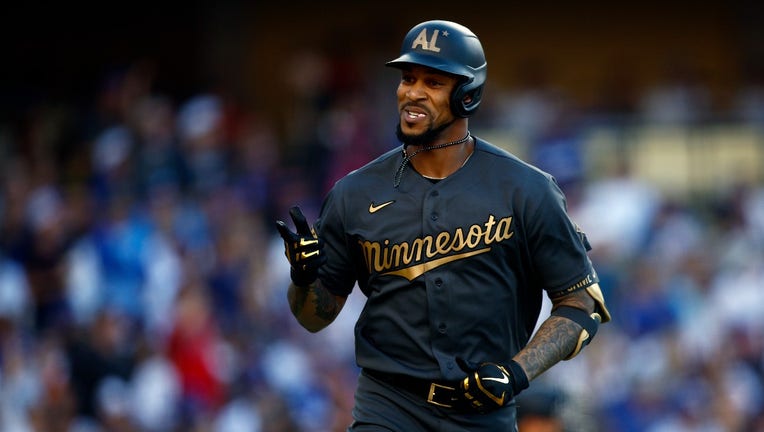 Byron Buxton #25 of the Minnesota Twins celebrates after hitting a solo home run in the fourth inning against the National League during the 92nd MLB All-Star Game presented by Mastercard at Dodger Stadium on July 19, 2022 in Los Angeles, California.  ((Photo by Ronald Martinez/Getty Images))

MINNEAPOLIS - Byron Buxton made his first start in his first Major League Baseball All-Star Game Tuesday night, and he’ll leave Dodger Stadium in Los Angeles with a memory he’ll have the rest of his life.

After striking out swinging in the second inning off Miami Marlins’ star Sandy Alcantara, Buxton blasted a high fastball from L.A. Dodgers pitcher Tony Gonsolin 425 feet over the left field fence. The solo homer, on a 2-1 count immediately after a two-run shot by Giancarlo Stanton, gave the American League a 3-2 lead.

Buxton did his trademark truck horn celebration rounding first base, and becomes the fourth Twins’ player to homer in an All-Star Game, joining Harmon Killebrew, Kirby Puckett and Brian Dozier.

"Just kind of went up there a little bit more aggressive. Put a good swing on it," Buxton told Tom Verducci of Fox Sports after hitting the home run.

Buxton was originally selected to the American League All-Star team as a reserve, but got the start in center field after Mike Trout pulled out of the game with a back injury. Buxton is hitting .216 and leads the Twins with 23 homers, 11 doubles, three triples and 43 RBI in 73 games.

Luis Arraez is with him at the All-Star Game, and entered the game at first base in the bottom of the fourth. Arraez struck out on a check swing in his first at-bat in the top of the fifth.

Arraez, after fouling off pitches of 102 and 103 miles per hour, sent another 100-plus mile per hour pitch to right center for a single in the eighth inning. Arraez came to the All-Star game leading all of MLB with a .338 average, and the AL with a .411 on-base percentage.

Buxton's home run was the eventual game-winner as the AL beat the NL 3-2. Stanton won the All-Star Game MVP award over Buxton for his game-tying, two-run homer.