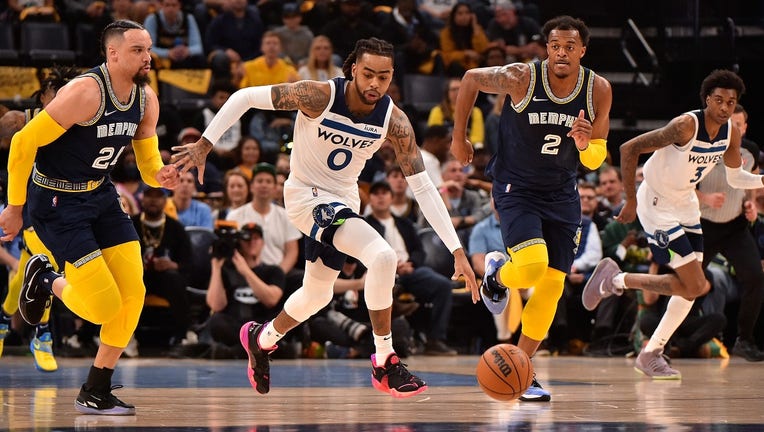 D'Angelo Russell #0 of the Minnesota Timberwolves brings the ball up court against the Memphis Grizzlies during Game Five of the Western Conference First Round NBA Playoffs at FedExForum on April 26, 2022 in Memphis, Tennessee. ((Photo by Justin Ford/Getty Images))

MINNEAPOLIS - For the second time in three games, the Minnesota Timberwolves blew a fourth quarter lead and now return to Minneapolis Friday night with their season on the line.

The Timberwolves led the Memphis Grizzlies 85-74 after three quarters in Game 5 Tuesday night, but the Grizzlies out-scored Minnesota 37-24 in the fourth quarter in a 111-109 win to take a 3-2 lead in the best-of-seven series. Ja Morant got the game-winning lay-up with one second to play, after Anthony Edwards gambled for a steal on the inbounds pass and couldn’t come up with it.

"I had already had my mind made up that I was going to try to steal it. Dumb mistake. It's over though, can't do nothing about it," Edwards said.

Before that, Edwards hit a game-tying 3-pointer after a Karl-Anthony Towns turnover, and a missed shot by D’Angelo Russell that put the Timberwolves down three in the closing seconds. The Grizzlies had 18 offensive rebounds for the game and scored 12 second-chance points in the fourth quarter. Memphis went on a 10-0 run to cut the deficit to 99-98 with 4:39 to play. The Grizzlies grabbed the lead on a Morant 3-pointer off a Brandon Clarke offense rebound with just more than a minute to play.

Timberwolves coach Chris Finch was asked about the team's shot selection late in regulation after the loss.

"That had nothing to do with it. How many offensive rebounds did they have in the fourth? (Brandon) Clarke had seven alone. That’s the game. That was it, that’s the game," Finch said.

"It takes all 48. We learned that last game, we just didn’t get it done today. I think it’s pretty as simple as that, just gotta play all 48 out," Towns said. "It’s disappointment, it’s a tough pill to swallow."

Desmond Bane added 25, and Brandon Clarke had 21 points and 15 rebounds, nine on the offensive end.

"You hold them to 41 percent, 25 percent from three, 66 from free-throw, you should be coming in here talking about how great of a win this was. You still find yourself on the wrong end of history, it’s disappointing. Nothing else to say about it," Towns said.

Towns is right. Minnesota had two 20-plus point leads in the Game 3 loss at Target Center. Finish that game, and Tuesday's becomes an elimination game for Memphis.  The Grizzlies chipped away at an 11-point deficit in the fourth quarter Tuesday night in Game 5 after the Timberwolves led most of the game, coming back from an early 13-2 deficit three minutes into the game.

"Just got to finish the game. The games that we lost, I feel like we could’ve won. It was the way we lost that makes you want to dwell on it and think about it," Russell said.

This series now has to go seven games for the Timberwolves to advance in the playoffs. If they don’t win Game 6 at Target Center Friday night, their season is over. If they had finished off Game 3 and done the same Tuesday, the series would be over and the Timberwolves would be in the Western Conference Semifinals. Now, the Timberwolves have to defend their home court one more time in an elimination situation.

"It's going to take 48 minutes of pure desperation. There’s no more time, no more wiggle room anymore for us," Towns said.