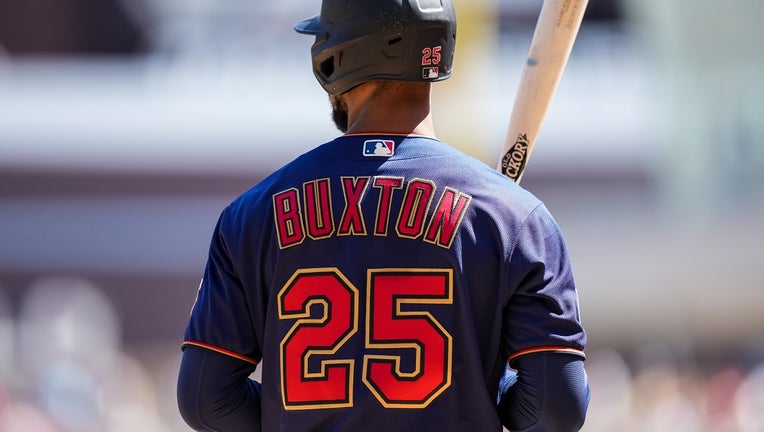 Byron Buxton #25 of the Minnesota Twins looks on against the Kansas City Royals on May 1, 2021 at Target Field in Minneapolis, Minnesota. (Brace Hemmelgarn / Getty Images)

Because of another bad break in Monday night’s 7-5, 12-inning win over the Cincinnati Reds at Target Field, literally and figuratively, Buxton is out indefinitely and won’t factor in the Twins’ lineup any time soon. Buxton was hit by a pitch on the hand during the fourth inning of Monday’s game. He pleaded his case to Rocco Baldelli and team trainers to stay in the game.

He eventually left the game a few innings later, and X-rays taken at Target Field showed he had a fractured finger. Buxton had played in just three games since missing 40 after going on the injured list with a hip strain. He went back on the IL on Tuesday, and could miss at least a month.

"I feel immensely for him and what he's going through. This is very tough on anyone. We were talking about rollercoasters, rollercoasters of emotions and having to deal with things. No one should have to deal with what Buck is dealing with right now, and none of it's through any fault of his own," Baldelli said Monday night. "He's the most upstanding, hard-working, wonderful teammate and baseball player that you could find."

Baldelli added, "This isn’t fair. That’s how I feel about the whole thing."

Since his return from the hip strain, Buxton homered as the Twins swept the Rangers in Texas.

Buxton was on an early American League MVP pace after being named the AL Player of the Month for April. He now heads back to the IL and had been hitting .369 with 10 homers, 11 doubles and 19 RBI and carried a 1.176 on-base plus slugging percentage.

He also gave the Twins their best defensive presence in center field, chasing down fly balls that nobody else in the game at his position can get to. He’s as big a piece as any for the Twins to get back in the AL playoff picture after a slow start.

Baldelli said after the game he was clearly dejected, knowing another injury in a career filled with them has him back on the shelf. And the way it happened, getting hit by a pitch, was largely out of his control.

"He is so tough, and he's willing to literally play with just about anything. He would have to not be able to walk for him to come out and say, 'I can't play.' The words never come out of his mouth. … He was in immense pain on the field after getting hit by that pitch, and I think anyone, including him, had to know if you're feeling something like that, it might not be a good situation," Baldelli said. "He doesn't react to pain. He just goes out there and keeps playing."

The Twins couldn’t finish off a rally Tuesday in a 10-7 loss to the Reds at Target Field. Trailing 7-2, they scored five in the bottom of the eighth to force a 7-7 tie. Tyler Naquin broke that tie with a three-run homer in the top of the ninth. The Twins are now 31-42 and 12.5 games behind the Chicago White Sox for the top spot in the AL Central. They’re 12 games out of the final AL Wild Card spot.