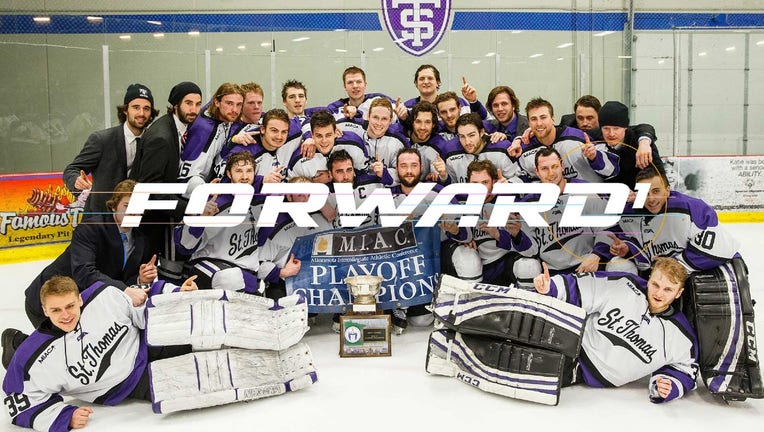 MINNEAPOLIS - The University of St. Thomas men’s hockey team is the final sport to find a home in a conference as the school’s athletic department prepares to transition to competition at the Division I level.

St. Thomas will compete in the Central Collegiate Hockey Association, a newly-formed league that’s headed by former Gophers’ hockey coach Don Lucia as commissioner. Starting in the 2021-22 academic year, the Tommies will compete in the league along with seven others who are breaking away from the WCHA. Those schools include Bemidji State, Minnesota State-Mankato, Bowling Green, Ferris state, Lake Superior State, Michigan Tech and Northern Michigan.

“We’re thrilled to receive an invitation from the CCHA, as it’s poised to create one of the most competitive hockey conferences nationally,” said Phil Esten, St. Thomas vice president and athletic director, in a statement. “This gives us an opportunity to create strong regional intraconference rivalries, face off against some of the most storied programs in college hockey, and develop a program that can skate with anyone in the country. Since the first conversation I had with Don Lucia, I believed this a great fit and am grateful we’ll be included in the inaugural year of the new CCHA.”

Lucia said in a statement he’s excited to have St. Thomas join the CCHA.

“St. Thomas has an outstanding academic and athletic tradition with experienced and proven leadership as they transition to Division I. St. Thomas fits nicely within the CCHA footprint and impressed us all with the level of commitment they have for their hockey program. The CCHA welcomes St. Thomas, the Twin Cities media and hockey fans to our league.”

Earlier this month, the NCAA Division I Council gave approval for St. Thomas to make the jump from Division III to Division I in athletes. Wednesday’s announcement now solidifies that all 22 varsity sports have a conference home starting in the 2021-22 season.

The St. Thomas women’s hockey team will join the WCHA and compete against programs including Minnesota, Wisconsin, Ohio State and others.

On Tuesday, MIAC officials announced that six fall sports, including football, men’s and women’s soccer, men’s cross country and volleyball, are being postponed until the spring of 2021 due to Covid-19 concerns.