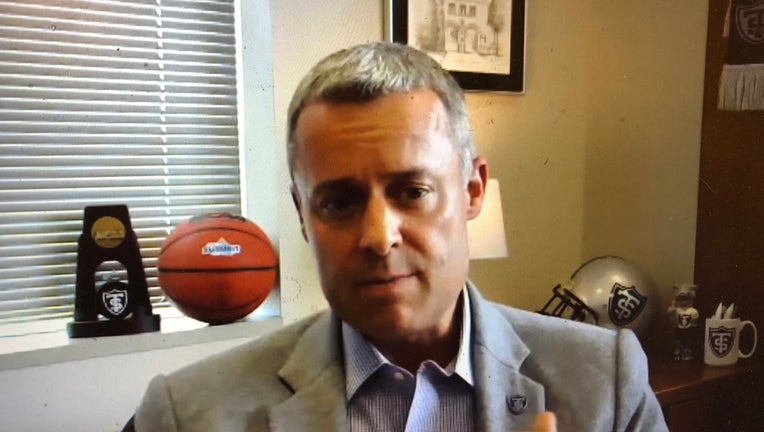 St, Thomas Athletic Director Phil Esten talked Thursday about the school's move from Division III to Division I starting in the 2021-22 academic year.

MINNEAPOLIS - Wednesday marked history for the University of St. Thomas, as its athletic department became the first in the modern era of the NCAA to get approved to make the jump from Division III to Division I for all sports.

After various delays and more than a year’s worth of discussions, St. Thomas will join the Summit League for 19 of its 22 sports. The Tommies will join the Pioneer Football League for football, the WCHA for hockey and are still in the process of finding a league for men’s hockey.

Wednesday marked history for the University of St. Thomas, as its athletic department became the first in the modern era of the NCAA to get approved to make the jump from Division III to Division I for all sports.

President Julie Sullivan remembers the moment Division I athletics became a reality for St. Thomas. Almost a year ago exactly, she was in Botswana with her husband and got an email from Athletic Director Phil Esten, who had just spoken with Tom Douple of the Summit League. That’s where the path started for 19 of the varsity sports at St. Thomas to make the jump.

They’re forging on despite financial concerns at colleges and universities across the country due to the Covid-19 pandemic. Many Division I schools are cutting sports to save money, while St. Thomas prepares to move up and plans to keep all 22 sports.

“This decision is really about the long-term future of St. Thomas. This opportunity might not be here for St. Thomas in another year or two or three years. The opportunity is here for us now. We just have to pace the transition and pace the investment such that we don’t compromise any of our other priorities,” Sullivan said.

After a long day of work and some celebrating Wednesday, Esten arrived home to congratulatory posters from his kids in the garage. Above every “D” for Dad was a 1, celebrating their move to D-I.

“Yesterday was an extremely gratifying day. It brought all of the hard work of so many together in this historic decision. Now some of the heavy lifting starts,” Esten said.

So how will it all look? Here is a look at the three conferences we know about.

Douple says from a regional standpoint, St. Thomas is the perfect fit for the Summit League.

“For us it gets us to 10 members, and it gets seven of our members within driving distance of the university and that’s really important for us,” Douple said.

Douple also noted that there are currently about 40,000 Summit League alumni living in the Twin Cities area.

Football is the main reason St. Thomas is making the move to Division I. Noting the Tommies’ football success under Glenn Caruso, MIAC presidents voted to change a bi-law in undergraduate enrollment for member schools, eliminating St. Thomas from the league.

The Pioneer League and the Ivy League are the only Division I football conferences in the country to have non-scholarship athletes. Commissioner Patty Viverito said it was a ninth-month process to bring St. Thomas in, and the experience included speculation, discomfort and pain. There were many uncertain times in the entire process.

She even compared it to child birth.

“Just like a birth, once it happens, you forget all of that and it’s nothing but joyous. I feel like I should be handing out cigars rather than congratulations,” Viverito said.

Caruso was named the St. Thomas football coach in 2008. He has a career record of 126-21, and is 86-12 against MIAC opponents. He’s led the Tommies to eight NCAA Playoffs, two trips to the Amos Alonzo Stagg Bowl and one national semifinal. Viverito says St. Thomas is uniquely qualified to go Division I, and not all programs in the Pioneer League have been receptive.

“I read with great curiosity a story about this Division III school that was too good and was going to get kicked out of its own league. I thought well isn’t that strange,” Viverito said. “I had a conversation with somebody in the Pioneer Football League who said, “We can’t take St. Thomas, they’re going to be too good.’”

Esten considers it a no-brainer for St. Thomas to join the WCHA for women’s hockey. Their opponents will include Minnesota, Wisconsin, Ohio State, University of Minnesota-Duluth, St. Cloud State, Minnesota State-Mankato and Bemidji State.

“There’s not another conference in the country that’s as competitive and has been as successful as the WCHA. For us to have the ability to compete with them every single weekend, it was something that was a perfect fit for us,” Esten said.

Tom Palkowski has a career record of 214-97-40 in 13 seasons with St. Thomas, and has led the Tommies to nine conference titles in the last seven years. They’ve reached the national semifinals twice.

What about men’s hockey?

The St. Thomas men’s hockey team remains the lone program looking for a conference. The most logical solution would be the newly-formed CCHA, with former Gophers’ hockey coach Don Lucia taking over as the commissioner.

“As we look for the right fit from a conference standpoint, it’s not simply our decision to make. We do need to seek and secure and invitation,” Esten said.

The bottom line: St. Thomas will become the second Division I institution in Minnesota, and they couldn’t be happier.

“It was really a great day for us, a day of celebration and a day of thanks,” Esten said.