Two years ago, the University of St. Thomas made the unprecedented leap to take its athletic programs from Division III and the MIAC to Division I.

MINNEAPOLIS - Two years ago, the University of St. Thomas made the unprecedented leap to take its athletic programs from Division III and the MIAC to Division I.

Less than two years later, the Tommies are taking the next step to be consistently competitive across its athletic platform. The school announced Tuesday a record $75 million donation that will kick-start the construction of a new arena for hockey and basketball on the school’s south campus.

It’ll be called the Lee and Peggy Anderson Arena, named after the couple that already donated $60 million for the Anderson Student Center, the current athletic facility and a parking ramp. St. Thomas will break ground on the arena in 2024, and the expectation is that it will be ready for competition for the 2025 sports seasons. 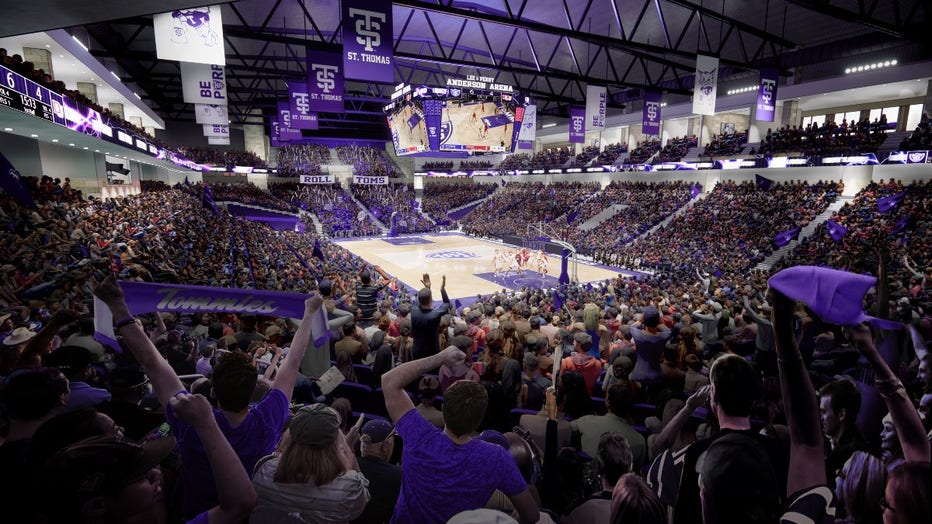 With the help of a $75 million donation, the University of St. Thomas will build a new arena for hockey and basketball to be ready for the 2025 athletic seasons. (St. Thomas Athletics)

"We want the students who come to St. Thomas to have the experience and form the connections that make their time on campus some of the most transformative of their lives. College is where you figure out how you can be a part of something bigger than yourself, building character and finding purpose," Lee Anderson said at Tuesday’s announcement. "That’s what it means to be a Tommie, doing good in the world and using your gifts for something bigger than yourself."

The project is projected to cost $175 million in total. The school is also seeking another $56 million through donations on top of the Anderson’s gift.

St. Thomas Vice President and Athletic Director Phil Esten emceed Tuesday’s event and was one of the many to personally thank the Anderson family for their latest donation.

"The impact of your philanthropy will be felt for generations as we prepare to build an arena to server our student-athletes, our campus and the broader community," Esten said.

The University of St. Thomas on Tuesday announced plans for a new hockey and basketball arena on its St. Paul campus to be ready for use by the fall of 2025.

For the first time in the school’s history, there will be hockey on campus. The teams currently share the St. Thomas Arena in Mendota Heights with St. Thomas Academy. The men’s program competes in the CCHA, and the women’s team is in the WCHA.

"How great is this?!" men’s hockey coach Rico Blasi said. "The Lee and Penny Anderson Arena will have a profound impact on the development and growth of our student-athletes. This arena will be our home to build relationships, win championships and make lasting memories."

Lee and Peggy Anderson’s $75 million gift is not only the biggest in the history of St. Thomas, it’s the biggest contribution to a university in Minnesota. It’s also believed to be the ninth-biggest donation ever to a Division I athletics program.

"It’s not just the magnitude of the gift that makes it noteworthy. This gift will enrich our student experience and campus life. This can be a game-changer for our 115,000 alumni all over the country and around the world. If we believe in the power and relevance of our mission, we must also welcome the opportunity to broaden our visibility and impact," President Rob Vischer said. "The Lee and Penny Anderson Arena will allow us to fully leverage our Division I journey."