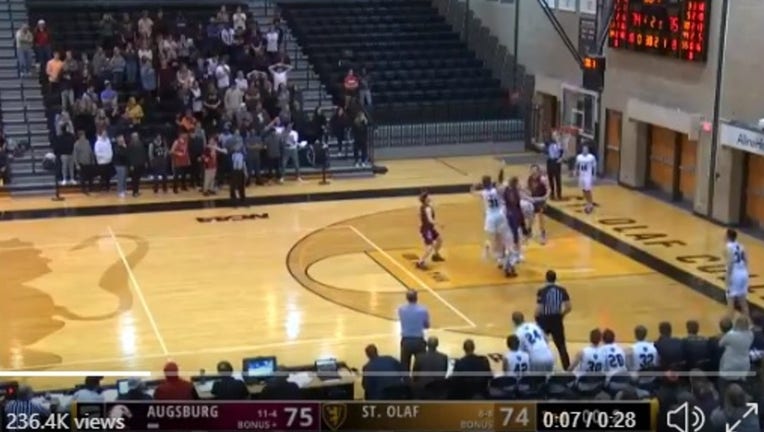 St. Olaf had a game-winning tip-in against Augsburg incorrectly waved off in a 75-74 loss to the Auggies Wednesday night in Northfield. ( (credit: St. Olaf Athletics) )

MINNEAPOLIS - The St. Olaf men’s basketball team is fighting for a spot in the MIAC Playoffs, and with six games to play, the Oles certainly didn’t get any help from the officials Wednesday night.

Trailing 75-74 to Augsburg with 0.2 seconds left, St. Olaf had the ball on the baseline under the basket with one chance to win the game. With that little time, a full shot cannot be attempted and the only way to get a look at the basket is with a tip-in.

That’s exactly what happened, until the officials said otherwise. Video shows Dominic Bledsoe inbound the ball in the air, and Troy Diggins Jr. is there just inside the free throw line for the tip-in. The Twitter account for St. Olaf Athletics posted video of the play, which slowed down, clearly shows Diggins tipping the ball before the final horn sounds and red light goes off. The video has gotten more than 230,000 views since late Wednesday night. Watch it for yourself.

The officials don’t have the benefit of a video replay system in Division III, much less the chance to slow it down. Jeff Peters, Jordan Kruger and Thomas Gardner officiated Wednesday night’s game, an ending they’d certainly like to have back.

Players looked at the officials in disbelief after the shot was waved off. The Oles hope it doesn’t cost them a shot at the postseason. The loss dropped them to 5-7 in league play, good for seventh at the moment.

The top six teams in the MIAC advance to the league tournament.