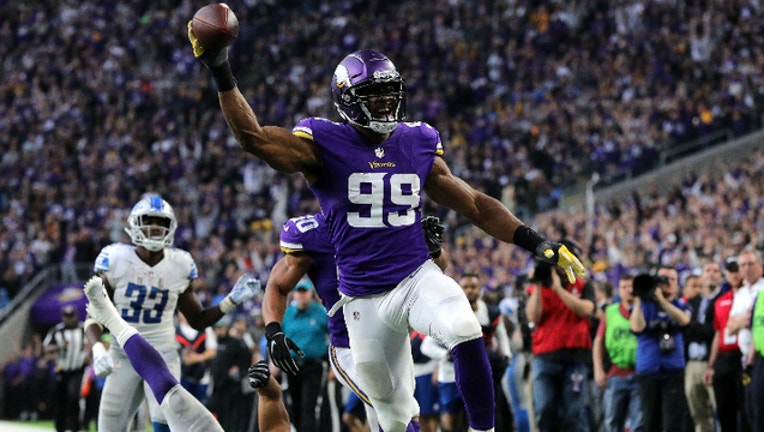 MINNEAPOLIS, MN - NOVEMBER 4: Danielle Hunter #99 of the Minnesota Vikings scores a touchdown after recovering a fumble in the fourth quarter of the game against the Detroit Lions. (Photo by Adam Bettcher/Getty Images)

MINNEAPOLIS - It appears the 2020 season for Danielle Hunter has come to an end before it ever really got the chance to start.

According to Ian Rapoport and Tom Pelissero with the NFL Network, the Minnesota Vikings star defensive end has decided to have surgery on a herniated disc in his neck. Hunter has not practiced with the Vikings since Aug. 14.

Hunter had 14.5 sacks last season, and became the youngest player in NFL history to record at least 50 sacks in his first give seasons. Hunter and Yannick Ngakoue were primed to be one of the most dynamic defense end duos in the NFL, but both are no longer playing for the Vikings this season. Minnesota traded Ngakoue to the Baltimore Ravens on Thursday for a pair of draft picks including a third round pick in the 2021 NFL Draft.

Vikings General Manager Rick Spielman spoke with reporters on Zoom Thursday for his annual bye week session, and offered no update on Hunter.

"We’ll let you know if there’s anything new that develops on that front," Spielman said.

Throughout training camp, Vikings coach Mike Zimmer called Hunter's ailment "a little tweak." That tweak is now costing one of the best pass rushers in the NFL his entire season.

The Vikings are off to a 1-5 start and are on their bye week before traveling to Green Bay to face the Packers next Sunday.