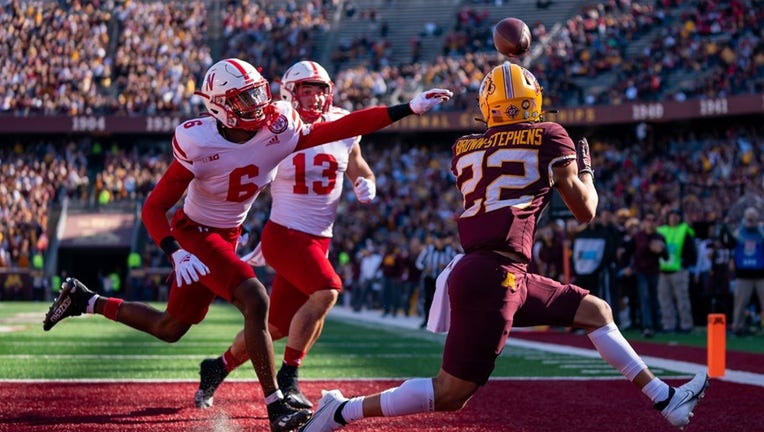 Michael Brown-Stephens had three catches for 58 yards and his first touchdown of the season in the Gophers' 30-23 win over Nebraska on Saturday at Huntington Bank Stadium. ((credit: University of Minnesota Athletics))

MINNEAPOLIS - With the receiving corps for the University of Minnesota football team dealing with injuries and absences much of the season, Michael Brown-Stephens is slowly emerging as a consistent threat for Tanner Morgan.

The redshirt sophomore came to Minnesota more known for being the nephew of music star John Legend. He’s starting to make a name for himself with the Gophers, and made his latest big play in Saturday’s 30-23 win over Nebraska.

With Daniel Jackson watching warm-ups in street clothes, Morgan needed an option after Chris Autman-Bell. Enter Brown-Stephens, who had three catches for 58 yards and his first touchdown of the season. That’s after making two catches at Purdue, with Dylan Wright missing the game for personal reasons.

He’s already got seven catches on the season after making four in 2020. Morgan hit him for a 28-yard dime that gave the Gophers a 14-3 lead over the Cornhuskers in the second quarter on Saturday.

"He has made himself into a really good wide receiver. He’s had to learn an awful lot, he’s had to fail an awful lot," Gophers coach PJ Fleck said Monday. "When opportunity knocks, you have a chance to open the door or keep it shut. He’s opened the door. His resolve is inspiring because there’s been a of lot of opportunities where he could have quit, thrown in the towel, and never did. He’s getting better and better, and this is just scratching the surface for this young man."

Daniel Jackson came into Saturday’s game Minnesota’s leading receiver with 14 catches for 155 yards and one touchdown. But he watched warm-ups and was not dressed. Fleck said Monday he was "unavailable" to face the Cornhuskers, and said he’s "probably questionable" for this Saturday against Maryland. If he is hurt, his injury has not been disclosed.

Without him, Autman-Bell had a career day with 11 catches for 103 yards and a score. Wildcat quarterback Cole Kramer also hit Brevyn Spann-Ford for a touchdown. Jackson’s status against the Terrapins is worth monitoring this week.

FLECK ON MARYLAND: ‘EVERYTHING STARTS AROUND THE QUARTERBACK’

The Gophers (4-2) host Maryland (4-2) at 2:30 p.m. Saturday at Huntington Bank Stadium, with a chance to get their third straight win and fifth in six games. The Terrapins have lost two straight since a 4-0 start, and are without two of their top offensive weapons. Receiver Dontay Demus Jr. is out for the season with a knee injury.

Minnesota is seeking revenge after a 45-44 loss at Maryland in overtime last season. In that game, Taulia Tagovailoia was a one-man wrecking crew with 394 yards passing and three touchdowns, and 75 yards on the ground and two scores. Jake Funk also ran for 221 yards and a score.

This season, Tagovailoa has more than 1,700 yards passing, 14 touchdowns and eight interceptions through six games. But the Terrapins managed just 14 points against Iowa two weeks ago, and 17 points at Ohio State last week. Much like Adrian Martinez was a focus last week for the Gophers, it’s on Tagovailoa this week.

"I think everything starts around the quarterback on offense. He’s an incredible creator. They have skill everywhere, "Fleck said "They want to be as balanced as they possibly can be. But everything revolves around the quarterback. Last year, he absolutely hurt us, he hurt us in every way possible. With his arm, with his legs, and he’s a creator. He’s one of the best creators in our league. We have to be incredibly sound on defense."

The Maryland defense also gave up 51 points to the Hawkeyes, and 66 to the Buckeyes. The Gophers have put up at least 30 points in four of their six games this season.

Fleck said it’ll come down to the "78 percent" like it normally does. Minnesota will have to win the turnover margin, tackling and make more explosive plays than Maryland to improve to 5-2. They managed to not win that 78 percent against Nebraska, and still win the game.

With Purdue winning at Iowa, the Gophers are in second in the Big Ten West and have an opportunity to go on a win streak before heading to Iowa City on Nov. 13.