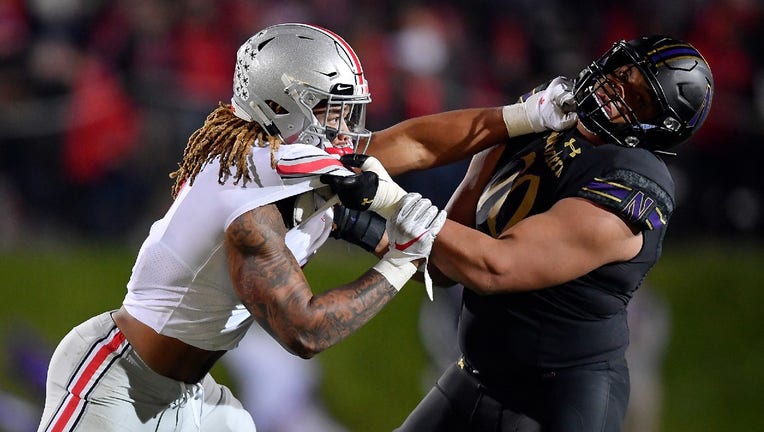 Chase Young #2 of the Ohio State Buckeyes battles Rashawn Slater #70 of the Northwestern Wildcats in the third quarter at Ryan Field on October 18, 2019 in Evanston, Illinois. ((Photo by Quinn Harris/Getty Images))

MINNEAPOLIS - We’re nearly three weeks away from the NFL Draft, where the right pick in the first round can change everything for an organization.

It seems like we say it every year, but it’s a pivotal time for Rick Spielman and Mike Zimmer with the Minnesota Vikings. The franchise went 7-9 last season and missed the playoffs for the fourth time in seven seasons under Zimmer. That’s not the standard Mark and Zygi Wilf had in mind when they bought the organization.

Last year, the Vikings traded Stefon Diggs to Buffalo for four draft picks, and used one of them to find what appears to be their next star receiver in Justin Jefferson. So what will the Vikings do with the No. 14 pick? They’ve spent free agency revamping the defense, so now what? Offensive line? A quarterback to eventually replace Kirk Cousins? A third wide receiver? More defense?

Here’s a few names being thrown out there, with the first round of the NFL Draft on April 29.

Enter Rashawn Slater, a three-year starter for Northwestern. He played left and right tackle with the Wildcats. He was third-team All-Big Ten in 2018 after 14 starts at right tackle, and honorable mention after 11 starts in 2019. He opted out of the 2020 season, but is a popular name in the first round for a team that needs offensive line help. ESPN’s Todd McShay has him going to the Vikings at 14.

ESPN’s Mel Kiper Jr. has probably the most ambitious mock draft for the Vikings. He has Minnesota trading up from No. 14 to No. 9, and selecting Oregon offensive lineman Penei Sewell. He became the first true freshman at Oregon to start a season opener in 20 years. Sewell started 13 games in 2019 and won the Outland Trophy, which goes annually to the top interior lineman in college football. He was a unanimous All-American before opting out of the 2020 season.

Mike Zimmer can never draft enough defensive players, it’s simply his calling card. The Vikings struggled at the line of scrimmage to stop the run and pressure the quarterback, albeit without Danielle Hunter and Michael Pierce. Fox Sports has the Vikings drafting Gregory Rousseau, a defensive end out of Miami, at No. 15. Rousseau was dominant in 2019 with 19.5 tackles for loss and 15.5 sacks. It’s his only real year of film, after opting out of the 2020 season and fracturing his ankle two games into the 2018 season.

We go back to the offensive line for the Sports Illustrated mock draft, which has the Vikings taking USC guard Alijah Vera-Tucker. He made 12 starts for the Trojans as a redshirt freshman, and was a Second Team All-Pac 12 pick in 2019 after 13 starts. He made six starts in 2020, and earned First Team All-Pac 12 honors.

Yet another option for the Vikings at No. 14 is Christian Darrisaw out of Virginia Tech. He made 12 starts in his first season with the Hokies, and made 13 starts as a sophomore. After his junior season, Darrisaw was considered one of the top offensive tackles in the country, earning First Team All-ACC and Second Team All-America honors.