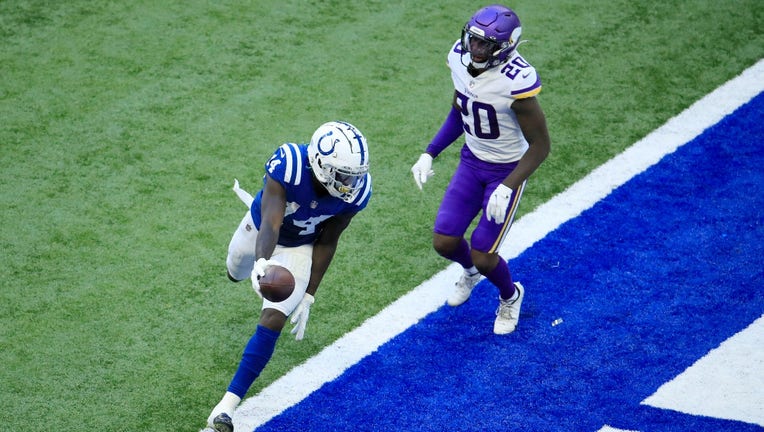 Zach Pascal #14 of the Indianapolis Colts runs for a touchdown against the Minnesota Vikings at Lucas Oil Stadium on September 20, 2020 in Indianapolis, Indiana. ((Photo by Andy Lyons/Getty Images))

MINNEAPOLIS - The Minnesota Vikings are 0-2, and it’s only going to get more challenging for a defense that hasn’t adjusted to life with several new faces.

The retooling is ongoing after Linval Joseph, Everson Griffen, Stephen Weatherly, Xavier Rhodes, Mackensie Alexander, Trae Waynes and Andrew Sendejo all left the franchise in the off-season. New defensive tackle Michael Pierce opted out of the season, and now Anthony Barr is out for the year after tearing a pectoral muscle last Sunday at Indianapolis.

The Minnnesota Vikings are looking to shore up their defense after losing some linebackers to injury.

To complicate matters even more, Mike Hughes and rookie Cameron Dantzler sat out practice Wednesday and Thursday with injuries. The Vikings are 0-2, and their next test is facing a 2-0 Tennessee Titans squad that was one game away from the Super Bowl last year.

The Vikings had added Yannick Ngakoue to the defensive line, and Todd Davis at linebacker, but they need time to learn the system and develop.

The team isn't panicking publicly, at least not yet.

“We had really good meetings yesterday and I thought it was a really good Wednesday practice. There was a lot of enthusiasm out at practice yesterday, they were pretty sharp. There is no woe-is-me around here, the guys are just coming out to get better every day,” Co-defensive coordinator Andre Patterson said. “We’ve still got 14 more football games to go, and that’s what it’s all about.”

That said, it’s been a mostly frustrating two games for the Vikings’ defense so far. In Week 1, they didn’t generate enough pressure on Aaron Rodgers. The result was 364 yards and four touchdowns. They allowed 158 yards rushing, 31 first downs, the Packers ran 76 offensive plays and were on the field for more than 41 minutes of game time.

Last week, the Colts had 354 total yards, 151 on the ground, had 24 first downs, ran 67 offensive plays and had the ball for more than 38 minutes. The Vikings’ got pushed back at the line of scrimmage, and committed untimely penalties that extended drives.

Linebacker Eric Wilson said they have the right players and the right coaches, it comes down to execution. Wilson will see a much bigger role the rest of the season alongside Eric Kendricks, with Barr out for the season.

“Make sure you do your job so the person next to you can have success doing their job. That’s important and that’s something that we need to get back to, just doing us and playing our ball and not trying to do too much,” Wilson said.

Their next challenge is a Titans’ offense led by Ryan Tannehill, Derrick Henry and Jonnu Smith. Tannehill is tied for second in the NFL with six touchdown passes through two games. He’s also averaging 7.3 yards per attempt.

“The biggest thing with Tannehill is he’s playing with a lot of confidence,” Vikings coach Mike Zimmer said. “He just looks so much more comfortable to me now than when we played him last time.”

“He’s powerful, he’s strong and then when he gets in the open field he does have a second gear in speed so it’s going to take all 11 of us to do our job to get him under control,” Paterson said. “Gang tackling him is the most important thing.”

The Vikings have to figure out a lot of things defensively, and in a hurry to avoid an 0-3 start. After Tennessee, they face Houston and Seattle, three straight playoff teams from last season.

“We all have to be ready to go. Be ready to play and be ready to do our job at the highest level possible,” Wilson said.