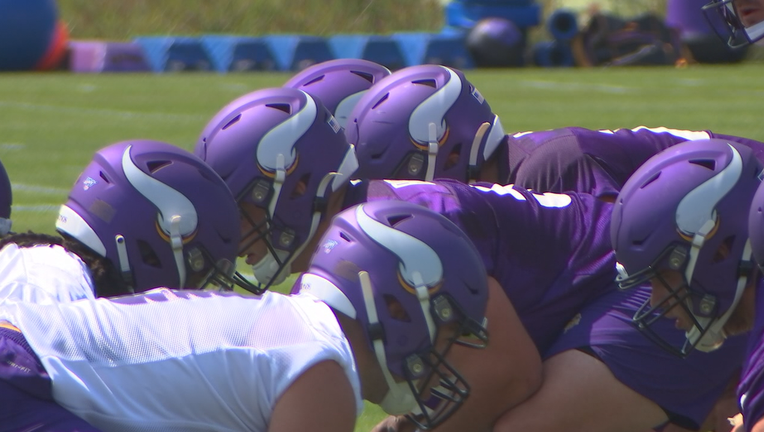 MINNEAPOLIS - Welcome to the offseason in the NFL. While we ponder what the future holds, or if there is one, for Aaron Rodgers with the Green Bay Packers, teams across the league start organized team activities within the next week.

That includes the Minnesota Vikings, who wrapped up minicamp last week for the 11 rookies in the 2021 draft class, and the undrafted college free agents they brought to town. Next up, the veterans return to the Twin Cities for OTAs. It’s a good refresher before mandatory minicamp, and before they get sent off for the rest of the summer before training camp.

It’s a pivotal year for Mike Zimmer and Rick Spielman. The Vikings are coming off a 7-9 season, and missing the NFC Playoffs. The Vikings have a 17-game slate this year, and if they’re not involved in the postseason, some changes might be coming. Here’s a look at a few player and position storylines heading into next week.

WHICH VETERANS WILL ACTUALLY SHOW UP?

The important thing to note about organized team activities is that they are completely voluntary. Both Mike Zimmer and Justin Jefferson said recently a majority of veterans are expected to be at TCO Performance Center next week. Some players will be, because they have workout bonuses in their contracts. They get paid for being there. It’s important to build camaraderie and continuity early. Some of the big names to keep an eye on include Danielle Hunter, Michael Pierce, Kirk Cousins, Dalvin Cook, Jefferson, Adam Thielen and Anthony Barr.

A clear emphasis this off-season has been upgrading the offensive line. The Vikings released Pat Elflein last season, and Riley Reiff is gone. The Vikings used a first round pick on Christian Darrisaw, then got Wyatt Davis in the third round. There’s a good chance that the starting offensive line at Cincinnati Week 1 will include Garrett Bradbury, Brian O’Neill, Ezra Cleveland, Davis and Darrisaw. Can Dakota Dozier, Dru Sami and Rashod Hill push for starting roles?

WHO IS THE THIRD WIDE RECEIVER?

We know Adam Thielen and Justin Jefferson are the top two receivers, that’s no mystery. Thielen is consistent, and Jefferson is coming off a historic rookie year. But who’s next in line? Returning veterans include Chad Beebe, Bisi Johnson and Dan Chisena. Can rookies Ihmir Smith-Marsette or Blake Proehl make a push?

WHAT'S GOING ON IN THE SECONDARY?

Mike Zimmer loves his defensive backs, and there remains unknowns heading into 2021. The Vikings brought back Mackensie Alexander and made a free agent splash with Patrick Peterson. Returning veterans include Kris Boyd, Cameron Dantzler and Harrison Hand. The Vikings traded former first round pick Mike Hughes, and the elephant in the room is Jeff Gladney, who is facing a legal situation involving an assault charge in Texas. The Vikings are letting the legal process take its course, but moves made in the offseason suggest Gladney might not be wearing Vikings’ purple in 2021.

Barring injury, Kirk Cousins is the quarterback for 2021. He’s under contract for the next two seasons, but what about the future? Sean Mannion was the No. 2 last season, but only saw the field once for a game with no meaning. The Vikings used a third round pick this year to draft Kellen Mond out of Texas A&M, a dual threat quarterback with a cannon for an arm. He’ll use this year to learn the playbook, go through his progressions and lean on Cousins. It’s really up to Mond to push Mannion to be the back-up quarterback.

Another reminder: Organized team activities are completely voluntary. So don’t hit the panic button if a few big names aren’t there. Be more concerned if they’re not on-site for mandatory minicamp.