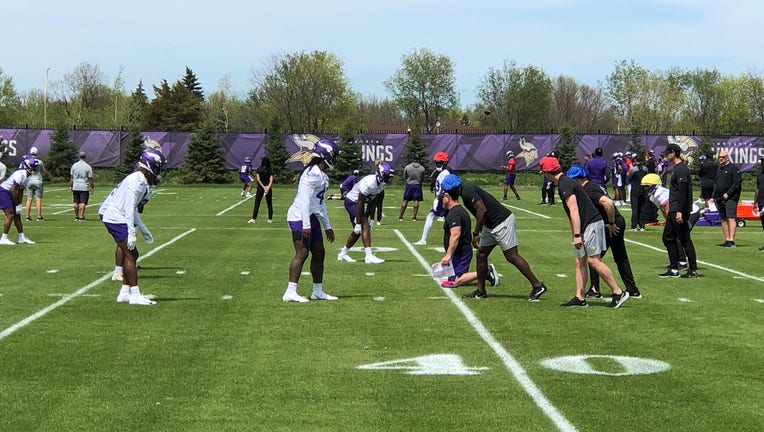 Minnesota Vikings rookies took the practice field for the first time on Friday for minicamp at TCO Performance Center in Eagan.

MINNEAPOLIS - It’s the middle of July and Minnesota Vikings training camp is just around the corner. Rookies report July 24, and the rest of the team will be at TCO Performance Center in Eagan two days later.

The first of 14 practices open to the public is set for Saturday, July 30. The Vikings will have their first padded practice on Aug. 1, and their annual night practice on Aug. 8. They’ll also have joint practices against the San Francisco 49ers Aug. 17-18, ahead of their Aug. 20 preseason game at U.S. Bank Stadium.

Here are five storylines to monitor as the Vikings get ready for training camp.

WILL A NEW VIBE MAKE ALL THE DIFFERENCE?

It became clear by the end of last season that Mike Zimmer’s time in Minnesota had run out. Zimmer and Rick Spielman were both fired the day after the Vikings beat the Bears to finish 8-9, miss the NFC Playoffs for the second straight year and third time in four years. Not good enough for an ownership group that gives the franchise every available resource to win.

Enter Kevin O’Connell as the new head coach, and Kwesi Adofo-Mensah to run the front office. Across the board, players say the vibe is different. The energy around the building is positive. Players enjoyed being around each other during OTAs and minicamp. Most of the key pieces from last year’s roster are back, so do they simply need to be treated and coached differently?

Will the new vibes translate to wins? We won’t know until Sept. 11 against the Packers, but it’s certainly possible for players to realized their full potential when they’re more comfortable in the building and on the field.

THE BATTLE AT RIGHT GUARD

Barring injury, there’s really only one starting offensive line spot up for grabs as the Vikings embark on training camp: Right guard. Christian Darrisaw, Ezra Cleveland, Garrett Bradbury and Brian O’Neill are established starters. The Vikings signed Chris Reed, Jesse Davis and Austin Schlottmann in the offseason. During OTAs and minicamp, Reed and Davis got the first-team reps at right guard. It’s one position battle to watch at training camp.

There’s nobody who wants to be on the field more than Irv Smith Jr. The tight end was set to have a breakout third season when he suffered a knee injury in the preseason, which ended up being a season-ending torn meniscus.

In two full seasons, Smith has 66 catches for 676 yards and seven touchdowns in 14 starts. He did mostly individual and side work during OTAs and minicamp, but the hope is he'll be ready for team situations in training camp. He’s an athletic tight end who can give defenses all kinds of problems under O’Connell if he can stay healthy.

HOW WILL THE DEFENSIVE ADDITIONS MESH?

The Vikings will have Danielle Hunter back healthy. They added Harrison Phillips to the defensive line, and Za’Darius Smith as an edge rusher in the new 3-4 defense. They added Jordan Hicks at linebacker, Chandon Sullivan in the secondary and brought back Patrick Peterson. Everybody is learning a new system after running a 4-3 under Zimmer, so it will be interesting to see how all the pieces come together.

WHICH ROOKIES WILL MAKE A SPLASH?

The Vikings left the NFL Draft with 10 new players, and took a different approach by trading their first round pick within the division. Their top pick is Lewis Cine, a safety out of Georgia that should complement Harrison Smith. They added Andrew Booth and Akayleb Evans to the secondary, Brian Asamoah at linebacker, Ed Ingram to the offensive line and former Gophers’ standout Esezi Otomewo to the defensive line.

The rookies that can earn playing time early will tell a lot about where the 2022 season can go.