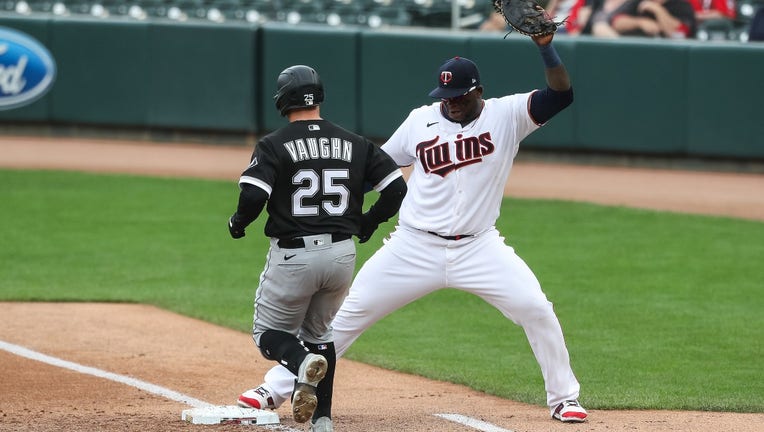 Miguel Sano #22 of the Minnesota Twins fields a ball at first base for a force out against Andrew Vaughn #25 of the Chicago White Sox in the second inning of the game at Target Field on May 19, 2021 in Minneapolis, Minnesota.  ((Photo by David Berding/Getty Images))

MINNEAPOLIS - The Minnesota Twins dropped to 14-27, the worst record in Major League Baseball, after a 2-1 loss in the series finale against the Chicago White Sox on Wednesday at Target Field.

The Twins managed just two hits, one of them being a Nelson Cruz home run, off White Sox starter Lucas Giolito. The 427-foot blast to center gave the Twins an early 1-0 lead, but it turned out to be their only score of the game. Giolito struck out 11 Twins over eight innings and was in control most of the day.

"When he has that ability, he’s tough. We’ve seen him before, we’ve gotten him before but he’s also pitched very well against us in the past. He’s a very good pitcher and I think he was truly on his game," Twins manager Rocco Baldelli said after the loss.

Matt Shoemaker went six innings for the Twins, allowing two earned runs on five hits while striking out two and walking four. He gave the Twins a chance when the game was turned over to the bullpen.

"Great day for him, he picked us up. Obviously we’re talking about a game in which we lost, but when you talk about a guy going out there, he got a ton of weak contact. We challenged him and I think he did a damn good job out there," Baldelli said "We asked him to go out there and just keep going, and he wants the ball. Shoemaker certainly did his work today."

The White Sox tied the game in the fifth on Adam Eaton’s single, which scored Leury Garcia. Garcia delivered a single in the sixth that scored Jake Lamb for what turned out to be the difference in the game.

The White Sox are tied with the San Francisco Giants at 26-16 for the best record in baseball, while the Twins are 11.5 games back after losing the series, and going 2-4 on the home stand.

The Twins now have a busy stretch coming up, with five games in four days. It starts Thursday with a doubleheader at the Los Angeles Angels of Anaheim that’s a makeup of missing games due to COVID-19 issues earlier this season. The Twins then head to Cleveland for a three-game series Friday night.