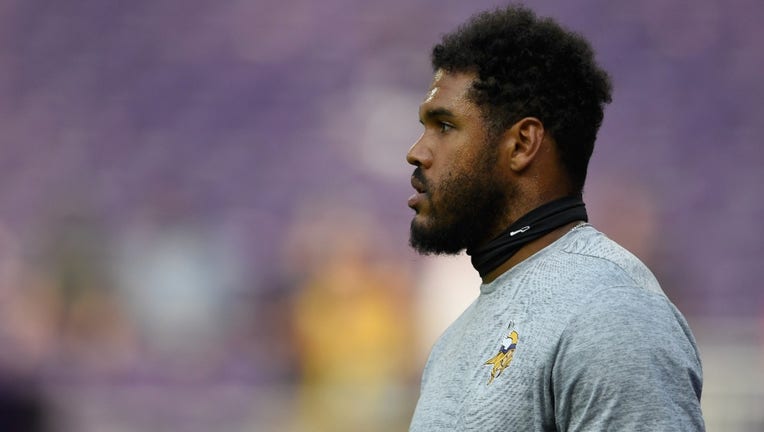 Anthony Barr #55 of the Minnesota Vikings looks on before the preseason game against the Seattle Seahawks at U.S. Bank Stadium on August 18, 2019 in Minneapolis. ((Photo by Hannah Foslien/Getty Images))

MINNEAPOLIS - The Minnesota Vikings are getting one player back in their defensive secondary for Sunday’s game against the Oakland Raiders, but they’re also losing a star linebacker.

Vikings defensive back Mike Hughes is active for Sunday’s game, about 11 months after suffering a multi-ligament knee injury in Week 6 last season. The 2018 first-round pick intercepted Jimmy Garoppolo in his first game last season and returned it 29 yards for a touchdown.

Hughes spent Training Camp on the physically unable to perform list and doing individual work on side fields. He returned to be a full participant in practice in the last week, and said earlier this week “I’m just ready to play.”

Linebacker Anthony Barr was on the field at U.S. Bank Stadium testing his injured groin, which had him limited in practice during the week. He won’t play against the Raiders after getting 11 tackles the last two games, and starting the season with a sack of Matt Ryan in Week 1.

Pat Elflein is active and returns to the offensive line after missing last week’s game with a knee injury. Mackensie Alexander will miss his second straight game with a dislocated elbow suffered against the Falcons.

The Vikings are looking to bounce back from last week’s loss at Green Bay, where Kirk Cousins threw two interceptions and lost a fumble. He said Wednesday, “Believe me, I’m not going to be playing quarterback here if I play the way I did this past Sunday, for much longer. I understand that.”

Mike Zimmer added, “We have the utmost confidence in him.”