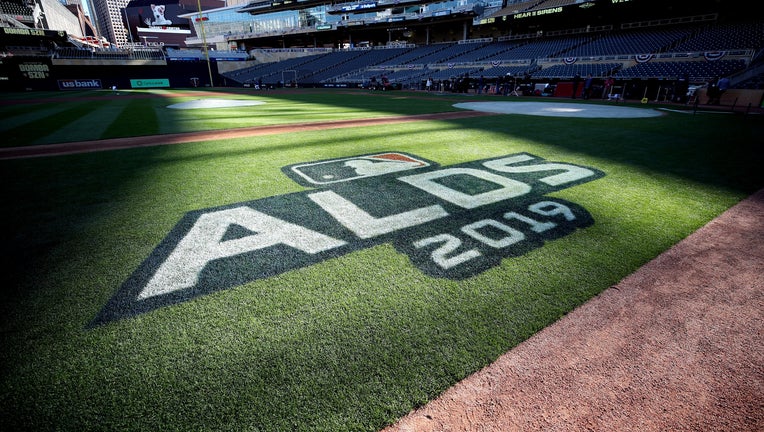 MINNEAPOLIS, MN - OCTOBER 07: A detail shot of the ALDS logo before Game 3 of the ALDS between the New York Yankees and the Minnesota Twins at Target Field on Monday, October 7, 2019 in Minneapolis, Minnesota. (Photo by Jordan Johnson/MLB Photos via (Getty Images)

MINNEAPOLIS - Major League Baseball on Tuesday announced its plans for the playoffs, and they include bubbles in California and Texas due to the COVID-19 pandemic.

The World Series will be played in Arlington, Texas, the home of the Rangers.

The World Series is slated to begin Oct. 20.

Most MLB teams have less than 15 regular season games remaining in the 60-game season, shortened due to COVID-19 and tense negotiations over labor and salaries for players.

The Minnesota Twins are currently second in the American League Central Division at 30-19, and are two games behind the Chicago White Sox after losing 3-1 Monday night at Guaranteed Rate Field. If the Twins can finish in the top four in the American League, they would host one of the Wild Card best-of-three series, with all games being played at Target Field.

The Twins are 21-5 at Target Field this season.