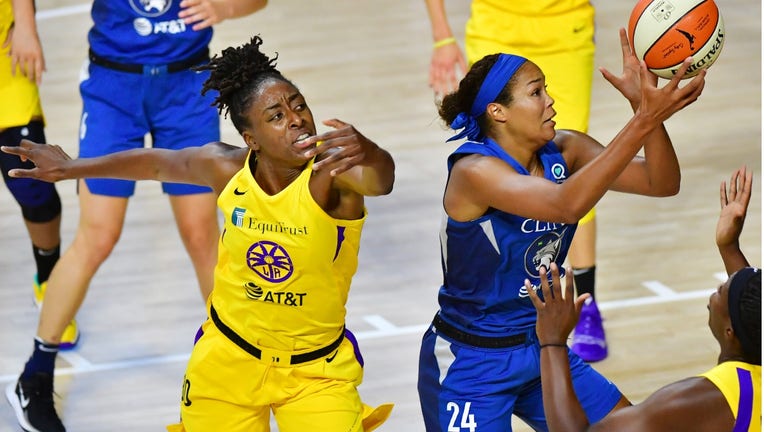 Napheesa Collier #24 of the Minnesota Lynx shoots the ball after a swat from Nneka Ogwumike #30 of the Los Angeles Sparks during the first half of a game at Feld Entertainment Center on August 09, 2020 in Palmetto, Florida. ((Photo by Julio Aguilar/Getty Images))

MINNEAPOLIS - The Minnesota Lynx are off to a fast start in the WNBA bubble in Florida, and forward Napheesa Collier has a lot do with it.

Collier was named the Western Conference Player of the Week on Monday. It’s the second career award and first this season for Collier, now in her second year with the Lynx. Minnesota is off to a 7-3 start with the WNBA playing its bubble at IMG Academy in Bradenton, Fla., due to the COVID-19 pandemic. That’s good for third overall in the league through 10 games.

Collier averaged 18.3 points, shooting 46 percent from the field, including nearly 43 percent from three-point range, and averaged 13 rebounds, three assists and 1.7 steals per game while playing more than 32 minutes per game as the Lynx went 2-1 last week.

Collier scored 26 points, added 13 rebounds and had a career-high five assists in the Lynx’s 94-64 win over the New York Liberty on Saturday.

Collier is currently 13th in the WNBA in scoring (14.9 points per game), third in rebounding, sixth in steals and seventh among forwards in assists. The Lynx face the Dallas Wings Wednesday night.