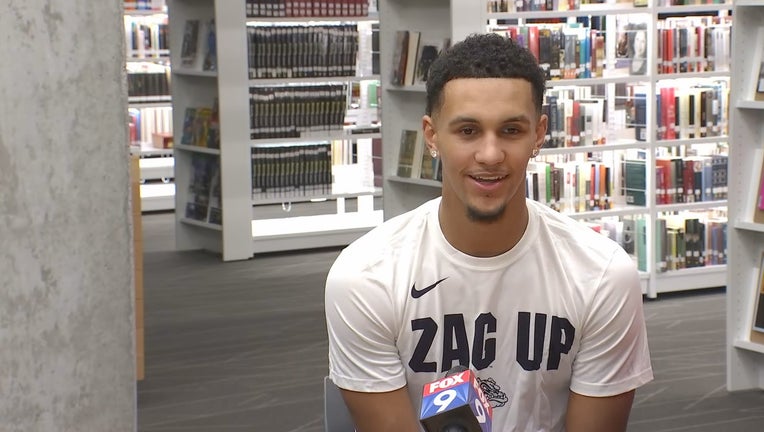 Jalen Suggs speaks with members of the media after announcing he will play for Gonzaga in college. (FOX 9)

MINNEAPOLIS - Jalen Suggs was a football and basketball star at Minnehaha Academy in Minneapolis, and after one standout season at Gonzaga, will realize his NBA dream Thursday night.

Suggs, a McDonald’s All-American who led the Bulldogs to an unbeaten season before a loss to Baylor in the national title game, is expected to be a lottery pick. He’s nearly a lock for the top-10, and could go in the top five depending on how the draft board falls.

Jalen Suggs could be lottery pick in Thursday’s NBA Draft

Jalen Suggs was a football and basketball star at Minnehaha Academy in Minneapolis, and after one standout season at Gonzaga, he will realize his NBA dream Thursday night.

Some projections have Suggs going to the Toronto Raptors No. 4 overall. He could go to the Orlando Magic at No. 5 overall, or go to the Oklahoma City Thunder at No. 6 overall. Suggs averaged more than 14 points per game and shot 33 percent from the perimeter in just one season at Gonzaga.

He spoke with reporters on Tuesday ahead of the NBA Draft, and had a message for any team that passes on him in the first round Thursday night: Look out, he’ll be motivated.

"I will say the ones that do pass up on me, take another prospect, it’ll come back and it’ll be to their detriment. You look at my track record and what I’ve done and where I’ve been, it’s always win at the highest level, and my play has been at the highest level. I think as far as that goes, if somebody else makes a decision that’s not me, that’s their opinion and I can never be angry at them for that. But I don’t forget those things, that’s just the kind of competitor I am."

The NBA Draft is Thursday night and currently, the Minnesota Timberwolves don’t have a selection in either round. Their first round pick went to the Golden State Warriors in last year’s trade that brought D’Angelo Russell to Minnesota.