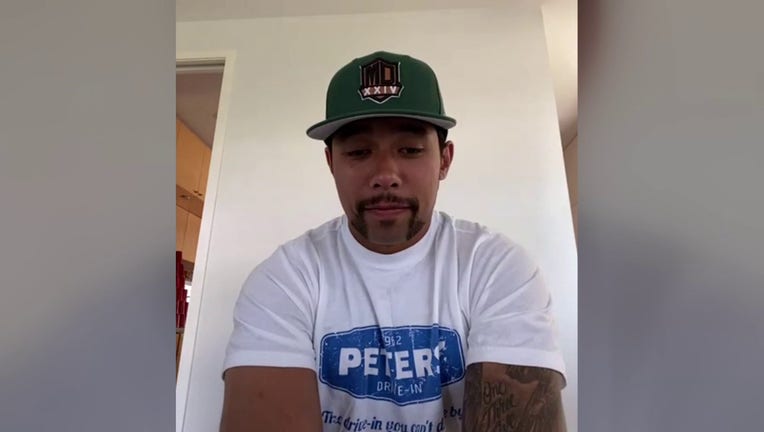 Matt Dumba spoke to reporters from his Calgary home Thursday about the Wild and NHL play being halted since March 12 due to the Coronavirus pandemic.

MINNEAPOLIS - There’s one good word that can sum up Matt Dumba’s last two seasons with the Minnesota Wild, including the current one that he doesn’t know is over yet: “Frustrating."

Last year, he played in just 32 games and his season came to an end after a Dec. 15 fight with Calgary’s Matthew Tkachuk. He threw a punch, and felt something pop on his right side. He tore his pectoral muscle, and to add insult to injury, he didn’t even land the punch.

There’s one good word that can sum up Matt Dumba’s last two seasons with the Minnesota Wild: Frustrating

Dumba played in 69 games this season before the NHL suspended its season due to the Coronavirus pandemic. This circumstance was out of his control, yet still frustrating.

“Glad I took a five year. Those would have been two tough seasons to battle with arbitration. It is weird, man,” Dumba said Thursday via Zoom. He’s referring to his five-year, $30 million contract that earned him $6 million this season.

The most frustrating part for Dumba this year? Having to sit now after all the work he did last offseason to be ready for the first game. His surgery was delayed, then had to wait for his surgically-repaired pectoral muscle to heal before he could begin rehab.

He was ready for the season-opener and even scored against Nashville. Dumba had six goals and 18 assists on the season before the NHL stopped play.

Now he’s frustrated by the uncertainty surrounding the Coronavirus pandemic that has the sports world sitting and waiting.

“It’s just that unknown. You don’t know, the season’s not over but it might start up, it might not. Flip-flopping and every week that goes by, you’re just not sure about anything really,” Dumba said.

Dumba is keeping himself busy during the quarantine period. He just got a new dog, Winona Rae, and stays in shape with the help of a home gym. He also recognizes that while he’s financially stable, many others are not. With that in mind, he’s giving back.

Dumba made a donation to the ACES Foundation in late March, helping Twin Cities youth with immediate and basic needs. He’s been an ACES Ambassador for four seasons.

“It’s important just because I’m in a situation where I’ve got a roof over my head, I’ve got bills paid, I’ve got food in my fridge and loved ones around me so I’m very fortunate,” Dumba said. “I think through this whole process, I think philanthropy and people helping each other is the way we get through something like this.”

The Wild was one of the hotter teams in the NHL when play was halted. After Bruce Boudrea was fired, the Wild was 8-3-1 in 12 games under Dean Evason, and they were 7-3 in their last 10 games.

They were one point out of a playoff spot with 13 games to play. Now, the NHL is pondering many scenarios to resume play. Some have included regional play with teams quarantined, another proposes a 24-team tournament. One game eliminations, as opposed to series that show the true intensity of the Stanley Cup Playoffs. Dumba is open to anything that keeps the Wild playing, but it’s hard for him to wrap his head around a tournament.

“The playoffs to me have always been seven-game series. That’s just tradition, I think it’s hard to just do tournaments now and just make it one game,” Dumba said. “I think to win the Stanley Cup, it’s got to be seven games.”

More than anything, Dumba and the Wild just want a chance. He wants a chance to prove he can be the player he wants to be, and the team wants a chance for the playoffs after recovering from a slow start to get back in the postseason mix.

As the uncertainty mounts, the frustration grows.

“That’s the thing, there’s so much hard work that went into it and to see that all go to waste would be very unfortunate,” Dumba said. I guess we’ll see what happens, I don’t think anyone has a concrete facts or anything that’s just set dates or anything like that. I’ll just be on standby like the rest of us.”