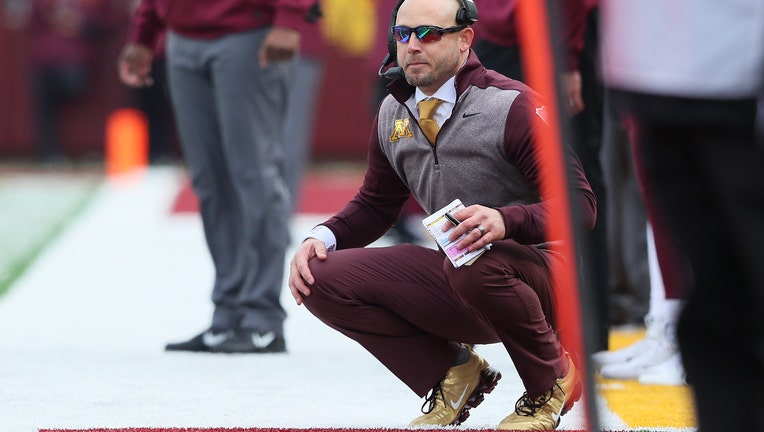 MINNEAPOLIS - P.J. Fleck wears a lot of hats as the head coach of the University of Minnesota football team. But over the past week, he’s turned more to listening and counseling than he has coaching.

It’s been more than a week since George Floyd died from an officer-involved incident in Minneapolis, which resulted in four officers being fired and Derek Chauvin arrested and charged for murder in manslaughter. The incident has sparked protests, both peaceful and violent, across the country.

Fleck suspended football activities in the wake of the incident, choosing to focus on how his players and staff can learn, listen and ultimately create change out of it. Fleck appeared on ESPN’s First Take on Monday, and on KFAN Radio Tuesday to talk about the past week.

“This week I’ve told our football team I’m a 39-year-old white, Caucasian male. I’m not your head football coach. You tell me, you call me, I’m here to listen. Too many times as a head coach we want to talk, and talk, and talk, and talk, and we get paid to talk and we talk for a living. But this is a time to listen and have empathy, and to be very real with what’s going on with the social injustice around us,” Fleck told First Take on Monday.

Fleck has held multiple team meetings, individual meetings with players, met with his staff, met with players’ parents, future recruits and their families to get a full grasp the impact that Floyd’s death has had.

Fleck recalled Tuesday with KFAN morning host Paul Allen a conversation he had with a mother of one Gophers player. She became emotional when talking about Floyd’s death and decades of social injustice, and Fleck said it hasn’t just been parents of black players that have gotten emotional. It’s been everybody.

A look at the Gophers’ roster indicates 43 athletes of color, and at least seven coaches or staff members. They’ve now witnessed social injustice in their own backyard.

“That’s authentic, it’s very difficult to hear those things. It just hurts your soul and it tears your heart apart. When those words and those emotions spill over to your heart, you’re not a human being if it doesn’t affect you. This program is going to be a leader of change. Somehow, some way, we will be,” Fleck told KFAN.

Fleck came to Minnesota with the mindset to change people’s perceptions, beliefs, thoughts and ideas. He just didn’t realize when he was hired how far that impact might go. He came to the Gophers with the task of taking over a football program that hadn’t won a Big Ten title in more than 50 years.

He led Minnesota to an 11-2 mark in 2019, a win over Auburn in the Outback Bowl and the program’s most successful season in 115 years. He’s also tasked with creating a culture and an environment where everyone feels comfortable, and they should speak up if they don’t.

In the aftermath of Floyd’s death, players have peacefully protested in Minneapolis and shared their thoughts with the coaching staff and each other.

“Everyone wants to see change, it has to change. We all know that, but knowing that and doing that are two different things. Listening to our players, events like this trigger something. I have players that have dealt with racism their entire life. I also have players on my team where it’s the first or second time they’ve ever seen it and it’s really affecting them,” Fleck told KFAN. “I couldn’t be more proud to be their coach because they’re being part of a solution, not part of a problem.”

Fleck admits he doesn’t have all the answers. No one does, but it starts with a universal change in how people treat each other. He says his current players have an incredible opportunity to be the catalysts for that change. After hundreds of years of racism and social injustice, his players can lead the way by how the eventually raise their kids in the generations to come.

The unfortunately reality is change won’t happen overnight. But it can happen.

Fleck is going to make sure he does everything in his power to have his program be a vehicle for change. He says it starts with listening.