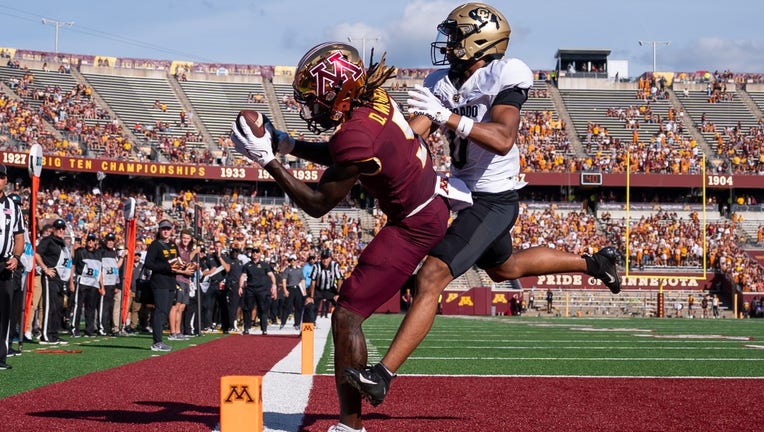 MINNEAPOLIS - PJ Fleck made official on Monday the news that Gophers’ football fans both feared and expected after Saturday’s 49-7 win over Colorado: Chris Autman-Bell is out for the rest of the season.

The sixth-year senior suffered a lower right leg injury with 41 seconds left in the first half, landing awkwardly after trying to catch a Tanner Morgan pass. Autman-Bell had three catches for 58 yards, including a 39-yard touchdown, before the injury. He was Minnesota’s top receiver entering the season, and led the Gophers through three games with 11 catches for 214 yards, and one touchdown.

P.J. Fleck on Chris Autman-Bell injury, Gophers win over Colorado, and looks ahead to Michigan State

Gopher coach P.J. Fleck holds his weekly press conference after the U's 49-7 win over Colorado. The Gophers play at Michigan State this Saturday.

As the saying goes, next man up. The good news for the Gophers is that their receiver room is as deep as it’s ever been in Fleck’s tenure.

"It’s unfortunate, your heart breaks for him because he’s worked incredibly hard. But there’s a lot of people on this football team here in year six that can make a ton of plays for us," Fleck said.

So what are Fleck’s options at receiver behind Autman-Bell? Here’s a look.

Losing Autman-Bell hurts, no doubt. But there are plenty of capable options behind him.

"You look across, there’s four or five wide outs who’ve all caught passes this year, all have played a ton of football, and can all make plays. They’re going to be relied upon," Fleck said. "Everybody can be the focal point, and that’s what this team offensively has to understand. My message to them was that, ‘You might be the guy that catches 12 passes in a game. You might go a game with one catch or zero catches. It just depends on what the defense is giving us.’ But that’s a good problem to have for us, that we have a lot of guys playing at a high level offensively that are showing that they can make the plays in the pressure of the moment and the pressure of the situation."