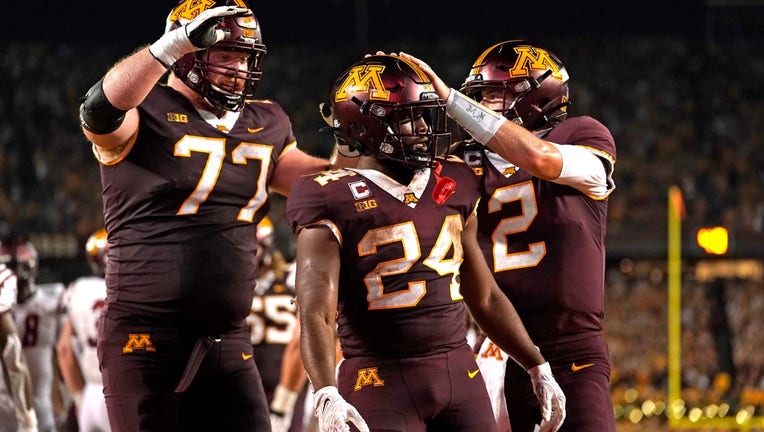 MINNEAPOLIS - The University of Minnesota football team will close out its regular season home schedule next Saturday, hosting Iowa at 3 p.m. at Huntington Bank Stadium in a rivalry game you can watch on Fox 9.

It’s Senior Day for the Gophers, which marks the final home game for Tanner Morgan, John Michael Schmitz, Mo Ibrahim and others. Minnesota is coming off a dominating 31-3 win over Northwestern to improve to 7-3 on the season, earn its third straight win and stay in the conversation for the Big Ten West title.

Gophers coach PJ Fleck talks about the race in the Big Ten West with two games to play after Saturday's 31-3 win over Northwestern at Huntington Bank Stadium.

After Purdue beat Illinois and Iowa beat Wisconsin on Saturday, there’s a four-way tie atop the Big Ten West between the Illini, Hawkeyes, Boilermakers and Gophers at 4-3. The task for the Gophers is simple: They need to close out the season with wins over Iowa and at Wisconsin. They need Illinois to lose one of its last two between Michigan and Northwestern, and Purdue to lose one of its last two between Northwestern and Indiana to win the Big Ten West and head to Indianapolis.

Ibrahim led the Gophers on Saturday with 36 carries for 178 yards and three touchdowns as Minnesota ran for 302 of its 366 total yards. The Gophers’ defense didn’t allow a touchdown, as Northwestern managed just 278 total yards and contained Maple Grove native to 98 total yards.

The battle for Floyd of Rosedale is the one blemish on PJ Fleck’s coaching record. He’s 0-5 against the Hawkeyes.