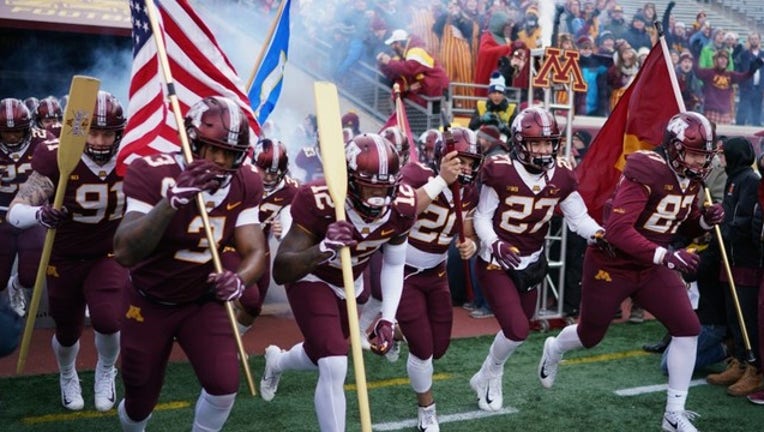 The Minnesota Golden Gophers run out onto the field before the game against the Northwestern Wildcats at TCF Bank Stadium on November 17, 2018 in Minneapolis. Northwestern defeated Minnesota 24-14. (Photo by Hannah Foslien/Getty Images)

PJ Fleck enters his third season with the Gophers, and the team's depth chart for the first game was released Tuesday night. There are no real huge surprises, but still some questions that need to be answered and can only be after playing an opponent.

Tanner Morgan will get the start at quarterback after finishing 4-2 last year, including leading the Gophers to wins at Wisconsin and over Georgia Tech in the Quick Lane Bowl. We don't yet know who the No. 2 quarterback will be. The battle is between freshman Jacob Clark and Cole Kramer.

We do know that Zack Annexstad is out indefinitely after having foot surgery after suffering a non-contact injury early in fall camp.

The starting running backs are listed as Rodney Smith or Mohamed Ibrahim. Fleck said earlier this week they will both get carries Thursday. Smith has more than 2,900 career rushing yards and suffered a season-ending knee injury against Fresno State last year. Ibrahim finished with more than 1,100 yards in 10 games as a freshman last year. Other backs include sophomore Bryce Williams and freshman Cam Wiley. Shannon Brooks was not listed as he continues his recovery from a knee injury against Indiana last season.

The starting offensive line will be big, and it will likely begin with Sam Schlueter at left tackle, Blaise Andries at left guard, Connor Olson at center, Curtis Dunlap Jr. at right guard and Daniel Faalele at right tacke.

The tight ends will likely be more involved in the offense this season, all four between Jake Paulson, Ko Kieft, Bryce Witham and Brevyn Spann-Ford are likely to get snaps Thursday night. Witham caught three passes for 75 yards last season, and Spann-Ford has splashed in fall camp.

There are no secrets when it comes to wide receiver. Tyler Johnson, Rashod Bateman, Chris Autman-Bell, Demetrius Douglas and Seth Green will all see the field. Clay Geary and Harry Van Dyne could also get reps. Look for Smith to take kick returns, and Antoine Winfield Jr. and/or Douglas to take punt returns. Winfield returned a punt for a touchdown in the opener last year against New Mexico State, and Douglas took a punt back for a score at Wisconsin last year.

On defense, the Gophers return at least seven starters from last season. Up front, they'll have Winston DeLattiboudere and Esezi Otomewu at defensive end, a combination of Sam Renner, Keonte Schad, Micah Dew-Treadway and Jamaal Teague at defensive tackle. Carter Coughlin will start at rush end opposite DeLattiboudere, and the linebackers include Thomas Barber, Kamal Martin and Thomas Rush.

Barber is the top leading tackler returning with 81 last year, including 1.5 sacks and four tackles for loss.

Fleck has yet to name a kicker. The leading candidates are freshman Michael Lantz, and redshirt freshman Brock Walker. Fleck said both have done well in fall camp, but neither has done enough to win the job. Jacob Herbers will handle punting and holding duties.