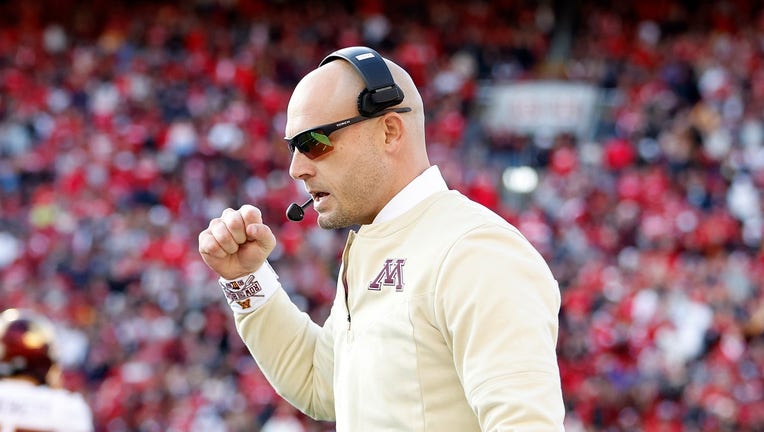 Head Coach P. J. Fleck of the Minnesota Golden Gophers celebrates a touchdown during the first half of the game against the Wisconsin Badgers at Camp Randall Stadium on November 26, 2022 in Madison, Wisconsin.  ((Photo by John Fisher/Getty Images))

MINNEAPOLIS - The University of Minnesota football team is heading to the east coast shortly after Christmas.

The Gophers, after beating Wisconsin to finish the 2022 season 8-4, on Sunday accepted an invitation to play in the Bad Boy Mowers Pinstripe Bowl. They’ll face Syracuse at Yankee Stadium on Dec. 29. It won’t be PJ Fleck’s first time at the Pinstripe Bowl. He was on the coaching staff for Rutgers when they faced Iowa State.

Fleck said it will be a new experience for nearly everyone on the Gophers’ roster.

The Gophers are going bowling in New York City for the 2022 postseason.

"When you poll our players on how many of you have actually been to New York City, five percent are raising their hand," Fleck said Sunday. "You’re talking about one of the best times to be in New York City, can’t wait. The guys are fired up about it."

Fleck called his previous experience in the Pinstripe Bowl a top-three bowl experience.

"It’s so different than most bowl experiences. This is something that’s really, really in-depth. The culture and the excitement and Times Square, I grew up on Home Alone so it’s really special," Fleck said.

Fleck is 3-0 in bowl games with the Gophers. Minnesota won the Quick Lane Bowl in 2018, the Outback Bowl in 2020 as part of a historic 11-2 season and last year’s 18-6 win over West Virginia in the Guaranteed Rate Bowl. Minnesota has won its last five bowl games.

The Pinstripe Bowl features a pair of coaches hired by Mark Coyle. He was the athletic director at Syracuse and hired Dino Babers in 2015. Coyle was hired as the Gophers’ athletic director in 2016, and hired Fleck at Minnesota after the 2017 season. Syracuse finished the 2022 season 7-5 after a 5-0 start. The Orange were ranked as high as No. 14 in the country.

The Gophers and Syracuse have one common opponent – Purdue. Syracuse beat Purdue 33-29 in mid-September, and the Gophers lost to the Boilermakers 20-10 on Homecoming at Huntington Bank Stadium.

TYLER NUBIN COMING BACK FOR 2023 SEASON

As you might expect, Fleck is just a tad excited to have senior safety Tyler Nubin coming back for the 2023 season. That news became official after the Gophers beat Wisconsin, a game Nubin missed with a hand injury.

Fleck joked Nubin has told him since September he was coming back. He has one year of eligibility lef, due to the COVID-19 season in 2020.

"Which time? He was telling me in Week 2 hey next year, we’re going to do this and this. I’m like are you coming back? He’s like I don’t know yet but next year. He would just say things like that. Then there were times he’d be like I don’t know coach, I might come out. He wears his emotions on his sleeve, but this was a decision that took a long time to get to," Fleck said. "We support him 100 percent, when a guy tells you he’s coming back you’re really excited because of the team. "This is about their experience. This was the best decision for the Nubin’s and I’m really excited about it."

Nubin finished third on the defense with 55 tackles, and had a team-high four interceptions. He’s a key piece with Jordan Howden and Terell Smith out of eligibility, and Michael Dixon entering the transfer portal.

Gophers’ sixth-year senior John Michael Schmitz on Monday was named a finalist for the Rimington Trophy, which goes annually to the top center in college football. Schmitz was the lone returning starter on the offensive line, and was a First Team All-Big Ten selection, the team’s first at center since Greg Eslinger from 2003-05.

Schmitz led an offensive line that helped the Gophers finished No. 11 in the country in rushing at 218.2 yards per game, which was second behind Michigan in the Big Ten.

On Monday, Schmitz accepted an invite to the Senior Bowl, part of the process in getting ready for the NFL Draft.