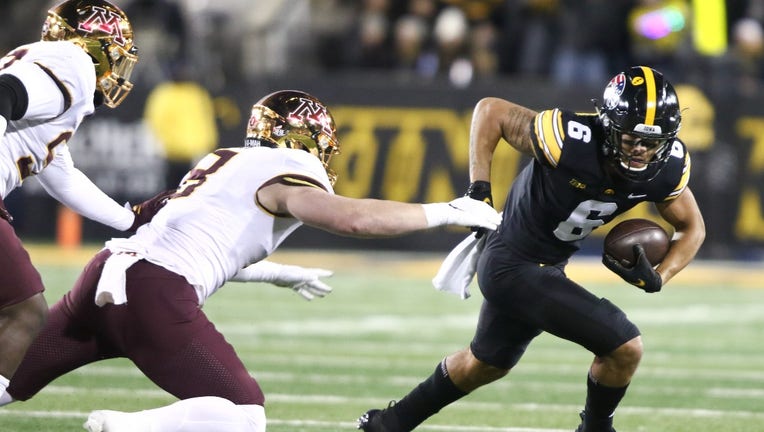 Wide receiver Keagan Johnson #6 of the Iowa Hawkeyes breaks a tackle on a touchdown run during the second half against defensive lineman Thomas Rush #8 of the Minnesota Golden Gophers at Kinnick Stadium on November 13, 2021 in Iowa City, Iowa.  ((Photo by Matthew Holst/Getty Images))

MINNEAPOLIS - Missed opportunities at critical times sum up why Floyd of Rosedale wasn’t on the plane back to Minneapolis after the University of Minnesota football team lost to Iowa 27-22 on Sunday at Kinnick Stadium.

Take a look at the stat sheet, and on paper it looked like PJ Fleck’s first win over the Hawkeyes as Minnesota’s head coach. The Gophers had 409 total yards, including 189 on the ground against a top-10 rushing defense. They won the turnover margin 1-0, and dominated the time of possession with having the ball for more than 40 minutes.

They tied in explosive plays, but Iowa got three touchdowns out of its four explosive plays on the day. The Gophers had three drives in the Iowa red zone all end in field goals for Matthew Trickett. Dragan Kesich also had a 53-yard field goal attempt blocked in the fourth quarter, which would’ve given Minnesota the lead.

"I thought we did everything we could to give our team the best chance to win in a lot of situations," Fleck said Monday.

Tanner Morgan was inconsistent, and Iowa took advantage. He missed Chris Autman-Bell on a 3rd-and-7, forcing a Gophers’ punt in the third quarter. On the next play, Alex Padilla beat Justin Walley for a 72-yard touchdown and 17-13 Iowa lead.

Kesich's blocked field goal came after Mar'Keise Irving was dropped for a 5-yard loss on a third down swing pass. Five plays later, Keagan Johnson should’ve been tackled for a loss, but Coney Durr and Thomas Rush didn’t finish tackles and Johnson scored from 27 yards out for a 24-16 lead.

Fleck defended Morgan on Monday, saying the Gophers receivers dropped too many passes. Morgan also took a sack with the game on the line, and the clock ran out. It doesn’t appear fans wanting a change at quarterback for the final two games of the season will get their wish.

After a historic 2019 season where he set multiple passing records, 2021 has been up and down for Morgan. He's completing 57 percent of his passes for 1,540 yards with seven touchdowns, and seven interceptions.

"It was not just Tanner, it was everybody. We dropped too many balls, and we can’t do that. We can’t afford to drop balls and get into a rhythm. With the small amount of throws that we had in that game, you have to be efficient," Fleck said.

The Gophers no longer control their own destiny to win the Big Ten West title after Saturday’s loss at Iowa. Minnesota needs to beat Indiana and Wisconsin in its final two games, and have the Hawkeyes falter with Illinois and Nebraska left. The Gophers travel to Indiana on Saturday, a Hoosiers’ squad that’s 0-7 in the Big Ten after a 38-3 loss to Rutgers last week.

Fleck says he told his team in meetings he’s treating Indiana like an 8-2 football team. The Hoosiers have lost six games to teams that were ranked in the top-20 at the time.

GOPHERS WILL HAVE AFTERNOON KICKOFF AGAINST WISCONSIN

The Gophers end their regular season against rival Wisconsin Nov. 27, and the hope is the game still has implications for the Big Ten West division title. Team officials announced Monday it will either be a 2:30 p.m. kickoff on ESPN, or a 3 p.m. kickoff on Fox.

The exact time will be announced on Nov. 22, depending on how Big Ten games go this week.