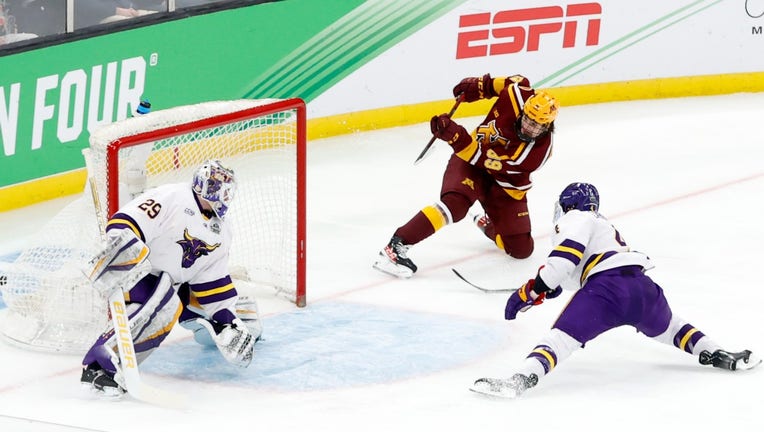 Last year, a trip to the NCAA Frozen Four was at stake. This year, the two programs battled each other Thursday night in Boston for a spot in the national title game. For the first time in program history, the Mavericks will play for a national championship Saturday night after beating the Gophers 5-1. Mankato dominated the game after Minnesota scored the first goal of the night.

The Gophers’ season ends with a 26-13 record, and the program still seeking its first national title since 2003. MSU-Mankato takes a 19-game win streak to Saturday’s national title game against Denver. The Mavericks also improved to 32-0 this season when leading after two periods.

"You’ve got to give Mankato an enormous amount of credit. For big chunks of the game, they kicked our butt. They scored exactly how we knew we had to defend, and then we were chasing the game," Gophers' coach Bob Motzko said after the loss.. "But I’m so proud of our guys, this was a terrific group of guys we had. This was not indicative of the season we had. We had a terrific season, a terrific team. We just ran into a really good hockey team tonight."

The Gophers struck first, then didn’t get many scoring chances the rest of the game. Matthew Knies gave Minnesota a 1-0 lead at 8:52 of the first period. Bryce Brodzinski stole the puck just outside the blue line, fed Knies, who then fed Brodzinski and fed it back to Knies on a 2-on-0 for the tap-in goal and 1-0 Gophers’ lead.

The Mavericks answered with a pair of goals, and grabbed the momentum, to take a 2-1 lead after two periods. Benton Maass beat Justen Close on a wrap-around goal at the 7:22 mark of the second period to tie the game 1-1. Reggie Lutz scored the go-ahead goal at the 13:31 mark, on a rebound wrap-around goal after a flurry in front of the net.

"The guys did a really good job of just sticking with it. There wasn’t a lot of panic on the bench or in the locker room. As they have this entire season, they stuck with it and they were rewarded for it," MSU-Mankato coach Mike Hastings said.

The Mavericks took a 3-1 lead at 1:57 of the third period after Jack McNeely’s initial shot was tipped by Ondrej Pavel past Close. Mankato took a 4-1 lead at the 13:17 mark on David Silye’s goal, rifling a wrist shot after a toe drag past a Minnesota defender. Brendan Furry added an empty-net goal with 1:09 to play to seal the win for the Mavericks.

The Gophers pulled Close down 4-1 with about four minutes to play, but couldn’t generate any scoring chances. Mankato out-shot Minnesota 32-17 for the game.

The only thing left to wonder for the Gophers is if Ben Meyers will win the Hobey Baker Award on Friday. He’s a finalist for the honor that goes to the best player in college hockey, as is Mavericks’ goalie Dryden McKay, who finished with 16 saves in Thursday’s win. The Gophers didn't have an answer for the Mankato's smothering approach.

Minnesota's season ends with 26 wins, one short of competing for a national championship. The Gophers won the Big Ten regular season title, got back to the Frozen Four for the first time since 2014 and saw the seats fill up again at 3M at Mariucci Arena.

"This was the best year of my life, honestly. This was the most fun group I’ve been a part of, and I’m damn proud to be a part of this team," Knies said.