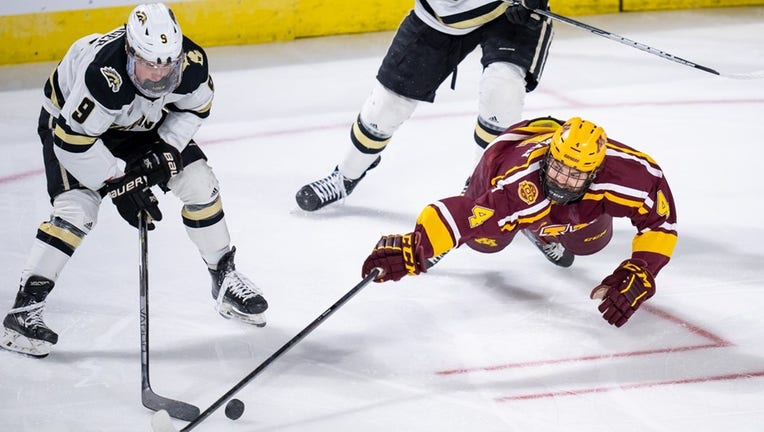 MINNEAPOLIS - The University of Minnesota men’s hockey team gave coach Bob Motzko quite the present on his 61st birthday: A 3-0 win over Western Michigan in the NCAA Tournament, and the program’s first trip to the Frozen Four since 2014.

The Gophers got goals from Matthew Knies, Aaron Huglen and an empty-net goal from Blake McLaughlin. Justen Close made 24 saves in the shutout win. Players sang Motzko "Happy Birthday" in the locker room as part of the post game celebration.

"This was a really strong weekend for our team. We played as tight and together for two games as you need to do and you want to do. Couldn’t be more proud of our group," Motzko said after the win.

"I think it’s a perfect birthday present, huh? Going to Boston, I don’t know if you can ask for too much more," senior forward Blake McLaughlin said.

Unlike Friday, when the Gophers had to come back from 2-0 and 3-1 deficits to beat defending champion UMass in overtime, they got out to the early lead and dictated the remainder of the game. Minnesota took a 1-0 lead at the 10:10 mark of the first period. Matthew Knies, minutes after being hobbled by a blocked shot, got a perfect feed from Brock Faber in front of the net and scored.

Minnesota nearly took a 2-0 lead in the second period, but Jaxon Nelson had a short-handed breakaway chance turned away. It then looked like the Broncos got the game-tying goal from Ronnie Attard, but it was waved off after review as the play was deemed offside.

The Gophers grabbed a 2-0 lead just 33 seconds into the third period. On the power play, Ben Meyers fed Aaron Huglen with a cross-ice pass, which Huglen one-timed for a goal. Friday night, Huglen fed Meyers for the game-winning goal in overtime against UMass.

The Gophers sealed the victory at 18:03 of the third period. After Matt Staudacher got called for tripping, Western Michigan pulled its goalie go to 6-on-4 against the Gophers. But McLaughlin won a puck battle in the defensive zone and sent the puck down the ice with just enough on it for an empty-net goal. The celebration was on.

"It’s been our goal year, it was my goal in November just the same as it was in January, just like everybody in that locker room. We couldn’t be more thrilled right now," Close said.

Along with Close's 24 saves, the Gophers blocked 15 shots in front of him in the victory.

The Gophers are heading to Boston, along with Minnesota State University-Mankato and Denver. Michigan and Quinnipiac are playing Sunday night for the final spot in the Frozen Four.

Minnesota is seeking its sixth national championship, and first since the 2003 season, when Motzko was an assistant coach for Don Lucia. The Gophers will be making their 22nd appearance in the NCAA Frozen Four. Not only did Sunday's win happen on Motzko's birthday, it's also four years to the day that Motzko took over as Minnesota coach. They're back where they belong, competing for national championships.

"You don’t take this job without the expectation that it comes with and you know that when you take this job. I’ve said all along, three years ago before COVID, I thought we were playing as well as anyone and it got shut down," Motzko said. "We were one game away last year. I’m just so proud of this team and this group of guys, all year long how steady they’ve been."

The Gophers got to the NCAA title game in 2014, but lost to Union 7-4. The Gophers will face Minnesota State University-Mankato on Thursday, April 7, for a trip to the national title game.