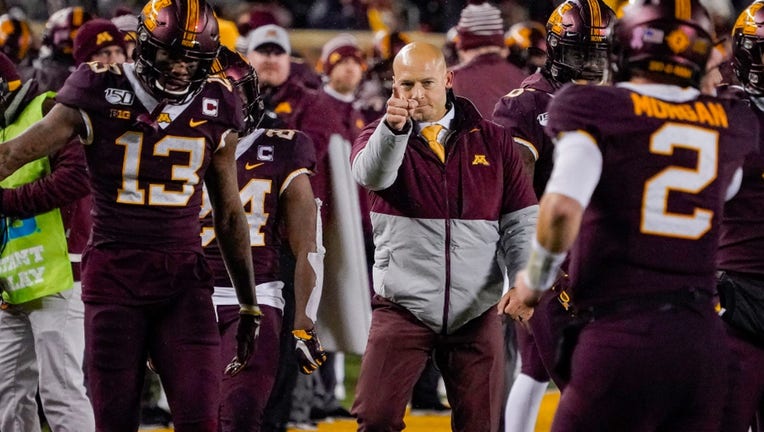 University of Minnesota Head Coach PJ Fleck during the game between the Minnesota Gophers and the University of Nebraska on October 12, 2019, at TCF Bank Stadium in Minneapolis, MN.

MINNEAPOLIS - Exactly 100 days from today, the University of Minnesota football team takes the field for arguably one of its biggest games in P.J. Fleck’s tenure.

The Gophers, coming off a 3-4 season altered due to the COVID-19 pandemic, host Ohio State on Thursday, Sept. 2, at TCF Bank Stadium. The hope is after not having any fans at games last season, there can be a capacity crowd to start the 2021 season.

It’ll be the biggest home game to start the season since Minnesota hosted TCU, when Jerry Kill was the head coach. The Buckeyes are coming off a 7-1 season, knocking off Clemson in the College Football Playoff semifinals before losing in the national championship game to Alabama, 52-24.

The Gophers bring back a majority of players not only from last year’s squad, but also from the 2019 team that made history, finishing 11-2 after beating Auburn in the Outback Bowl. Minnesota’s 11 wins were the most in 115 years, and the Gophers finished the season ranked in the top-10 for the first time in five decades.

Fleck was recently ranked the No. 25 head coach among Power Five conferences in college football, one of eight Big Ten coaches ranked. Fleck is 23-15 in four seasons at Minnesota, and 15-19 in the Big Ten. Beating Ohio State in September to open the regular season would get the program back on the national landscape.

The Gophers’ offense returns all but one starter from last season, Rashod Bateman, who was a first round pick of the Baltimore Ravens. Reigning Big Ten Running Back of the Year Mo Ibrahim will return after leading the league in rushing yards and touchdowns. Tanner Morgan is back for his third year as a starter.

Minnesota’s defense will be loaded up front with Esezi Otomewo, Boye Mafe and Nyles Pinckney among others on the defensive line. The Gophers bring back Mariano Sori-Marin and Braelin Oliver at linebacker, and have added transfer Jack Gibbens. In the secondary, they’ll be led by Jordan Howden, Tyler Nubin and they’re hoping Terrell Smith can take a jump after making a splash in the Spring Game.

If the Spring Game was any indication, the Gophers won’t have any difficulty filling TCF Bank Stadium against the Buckeyes. A record 10,000 free tickets were given away in a matter of hours to watch the annual spring scrimmage.