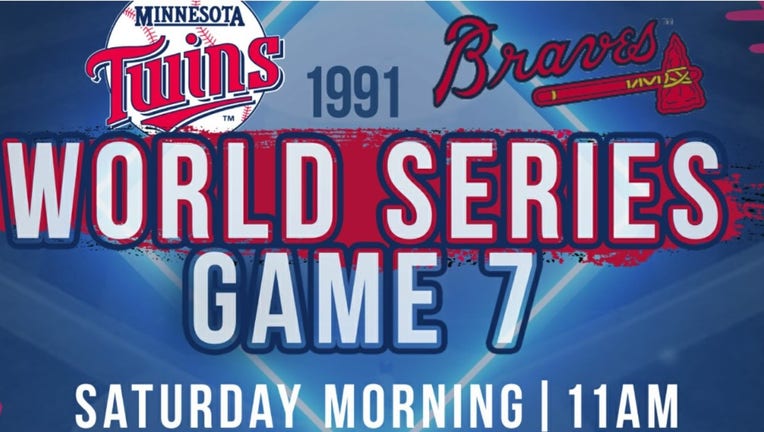 MINNEAPOLIS - Want to relive the last time a Minnesota team won a world championship among the four major sports? You can do just that Saturday morning on Fox 9.

The Minnesota Twins beat the Atlanta Braves in 10 innings in one of the greatest games in World Series history in 1991. Fox 9 will air Game 7 of that World Series at 11 a.m. Saturday.

Jack Morris had one of the most epic performances in World Series history, pitching 10 shutout innings for the Twins. Morris was named the World Series MVP after the Twins beat the Braves 1-0. Morris now serves as a TV analyst with Fox Sports, both for the Twins and Detroit Tigers.

ESPN in 2003 named the 1991 World Series the “Greatest of All Time” in its 100th anniversary countdown. Five of the seven games were decided by one run, four of the seven were decided in the final at-bat and three went to extra innings.

The Twins won the game in the bottom of the 10th after Dan Gladden led off the inning with a bloop double, then scored on Gene Larkin’s single to deep left center.

The Twins got the series to a seventh game thanks to heroics from Kirby Puckett in Game 6. Puckett hit a walk-off home run to left center off Charlie Leibrandt, and Jack Buck’s call on the play, “Into deep left center, for Mitchell, and we’ll see you tomorrow night!” remains one of the greatest calls in MLB history.