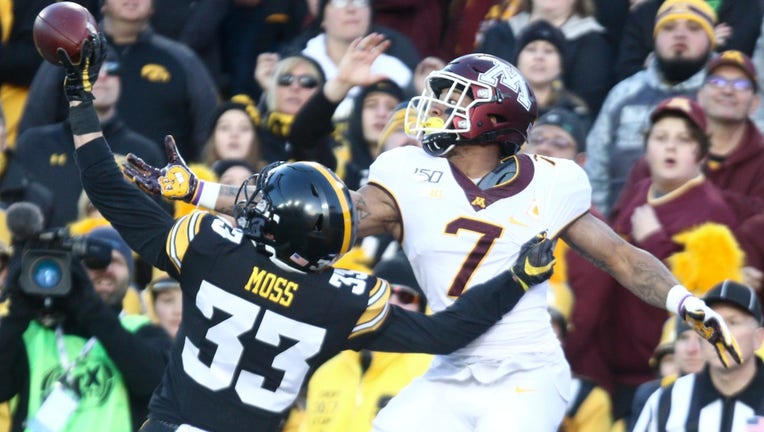 Defensive back Riley Moss #33 of the Iowa Hawkeyes breaks up a pass intended for wide receiver Chris Autman-Bell #7 of the Minnesota Gophers during the first half on November 16, 2019 at Kinnick Stadium in Iowa City, Iowa. ((Photo by Matthew Holst/Getty Images))

Iowa City - PJ Fleck got an unsportsmanlike conduct penalty in the name of player safety during the third quarter of Saturday’s 23-19 loss to the Iowa Hawkeyes in front of a full house at Kinnick Stadium. He said after the game he would do it all over again if he had to.

On a 4th and 4 deep in Iowa territory, Tanner Morgan had star receiver Tyler Johnson open on a slant. He might have taken it in for a game-tying touchdown if he caught it.

The Minnesota Gophers lost to the Iowa Hawkeyes 19-23.

Johnson, who finished the game with nine catches for 170 yards and a touchdown, dropped what would have at least been a first down. He then took a late hit and stayed on the ground. Fleck ran out on the field, apparently too soon, and was flagged. He said he told the Gophers after the loss, “I cost our team the game.”

“I told our team I take 100 percent full responsibility to this loss. I said I’d do it all over again. I was told I ran on the field too fast. I get that, but I didn’t know when there was a red light and a green light to tell when we can go on the field. The whistle blew, the play is over, my player is laying motionless on the ground,” Fleck said. “The play was over, whistle blown, flag thrown and then I ran onto the field. I know I ran fast, but the kid is motionless on the ground. I don’t understand that call in that situation but that’s how they felt and we have to be able to accept that.”

The reality is the penalty doesn’t happen if Johnson makes the catch, but Johnson said himself the penalty was the head coach doing his job.

The reality also exists that it’s a catch in a big spot that a big-play guy like Johnson knows he has to make.

The Gophers didn’t make enough plays Saturday, and Iowa got off to a hot start. It turned out to be a tough loss in front of more than 67,000 fans in Iowa City, with several thousand Gophers fans making the trip south after the program’s first 9-0 start since 1904. The loss snaps an 11-game win streak for the Gophers, dating back to last season, and comes six days after moving up to No. 8 in the College Football Playoff rankings.

Minnesota had no answers for Iowa’s offense early, which scored on each of its first three possessions. Nate Stanley hit Nico Ragaine for a 21-yard touchdown on the game’s first possession, giving the Hawkeyes an early 6-0 lead. It grew to 13-0 on Tyler Goodson’s 10-yard rushing touchdown at the end of the first quarter.

The Hawkeyes led 20-3 with 6:20 left in the first half after Stanley hit Ihmir Smith-Marsette on a 5-yard crossing route over the middle. Goodson ran for 77 of his 97 yards in the first half, and Stanley got enough protection from his offensive line to find open receivers.

The Gophers had a chance to grab the momentum into the half with four seconds left and the ball inside the Iowa 5-yard line, but Fleck opted to take the three points on a Brock Walker field goal with Minnesota getting the ball to start the third quarter. Walker’s kick hit the right upright before going through.

Morgan led the Gophers on a scoring drive to start the second half and get Minnesota back within one score. He hit Johnson on a 28-yard touchdown up the seam to get the Gophers within 20-13. They were driving near the end of the third quarter when Johnson had the drop on 4th and 4. Iowa was flagged for unsportsmanlike conduct on the hit on Johnson, and Fleck got his for going on the field too early.

“I feel like that was nobody but me, Tanner did a great job, the O-line did a great job protecting. I was able to create separation, I’ve just got to finish it off right there,” Johnson said.

Iowa converted a 27-yard field goal to take a 23-13 lead with 7:13 remaining. Morgan again led the Gophers on a scoring drive, capped by Rodney Smith’s 1-yard touchdown run to get Minnesota within 23-19. But Walker missed the point after, which proved costly with the Gophers not recovering the ensuing onside kick, then forcing Iowa to punt.

It meant the Gophers had to drive 80 yards and score a touchdown with about 1:50 remaining and no timeouts. Iowa essentially sealed the win with consecutive sacks on Morgan, who left the game injured and was likely in the concussion protocol. Morgan finished 25-of-36 for 368 yards and a touchdown. The Gophers struggled running the ball against Iowa’s defense, with just 63 of their 431 total yards. Rodney Smith finished with just 47 yards on 14 carries.

For all the missed tackles and missed opportunities, the Gophers had a chance for a game-winning drive at the end. But Iowa got the win, the Gophers were unable to snap a 20-year losing streak in Iowa City and Floyd of Rosedale stays with the Hawkeyes for another year.

After a rough start defensively, the Gophers limited Iowa to 290 total yards, including just 65 passing yards from Stanley in the second half.

The good news for the Gophers is they still control their own destiny in the Big Ten West. They can win the division and clinch a spot in the Big Ten Championship with a win at Northwestern next Saturday, and a Wisconsin loss to Purdue. They can also clinch with wins at Northwestern, and over the Badgers on Dec. 4 to finish the regular season.

“It’s not the end of the world, it’s a tough loss. It hurts, it should hurt, it’s a rivalry game. This is what college football is all about, football matters in the state of Minnesota, it matters nationally, that’s a good thing. This is one game, that’s all that means,” Fleck said. “Everything we want and everything we wrote down is right in front of us. Nothing has changed. If we had won that game, Wisconsin won today, we’ve still got to go find a way to beat Wisconsin. And then if you go to the Big Ten championship, you’ve got to find a way to beat the East opponent. You had to do that anyway. It matters because it’s a game and every game matters. Everything is still right there in front of us.”