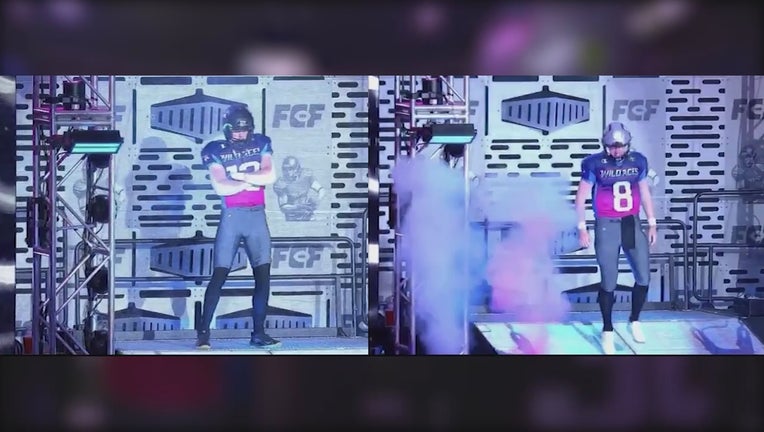 (FOX 9) - If you thought pro football season is over, think again.

Soon after the raising of the Lombardi Trophy, a new league started to rise. One prominently featuring two native Minnesotans.

Jackson Erdmann and Travis Toivonen are part of the FCF -- short for Fan Controlled Football league.

Jackson Erdmann and Travis Toivonen are part of the FCF -- short for Fan Controlled Football league.

"I don’t think anyone’s played anything like this because this hasn’t existed until now," Erdmann said.

It’s a four team setup based outside of Atlanta, GA. The format is 7-on-7 football and played on a 50-yard field. No special teams are involved, but there is a kicker here.

Fans are in charge of almost everything, from calling plays to even selecting team uniforms -- doing all of it on the live streaming platform Twitch.

"It’s essentially an in-person Madden mixed with fantasy football," Erdmann said. "The fans are in control, the arena is like WWE."

"Fans are fully in control of the plays and I have no idea what they’re going to call until literally 10 seconds before I’m supposed to snap it," Erdmann added.

Fans call the plays that are then relayed into players’ helmets, and they go out and run that particular play. This all happens with music blaring and machines bellowing smoke. It's a different spin on the game, but still football at the end of the day.

"There’s so much going on, you kind of have to bring yourself back to Earth because you’re here to play football and I’m here to get good film," Toivonen said.

Erdmann put together a record-setting run at St. John’s, while winning the Gagliardi Trophy with the Johnnies. Toivonen, a native of Red Wing, played wide receiver at the University of North Dakota and caught seven touchdowns in his final season in 2019. Their sights were set on the NFL, but that goal was put on hold after pro days and tryouts were cancelled amid the pandemic. This avenue in FCF is part of their winding road to the top.

"It was building up and I was excited, but everything always fell through," Erdmann said of preparing during the pandemic. "To actually have this league and have this opportunity to be here is a relief."

"Two weeks before my pro day, they called off all the scouts, so I had no numbers," Toivonen added. "This has just been a dream come true to be able to play football."

Teams are shuffled every week with a draft on Wednesdays, something fans control too. Erdmann stays on the same team as a franchise player, but each game is a new adventure for Toivenen.

The concept is pretty simple: standout by making highlight plays, and you get to keep playing. You also have to be saavy on social media to convince teams to draft you.

"My last name is super hard to pronounce, so we got the choice to put whatever we wanted on our (jersey) nameplates," Toivonen said. "Mine was 'Trav Daddy' because it’s my Xbox gamertag, so that caught on with the fans which helped me get drafted."

"I think promoting yourself and actually getting recognized is a big part of advancing your career," Toivonen added

The games are quickly paced and also quirky.

There are video game-like "Power Ups" involved that give teams a boost during games. For example, there's an extra "5th down" for teams that are earned as the games go along.

No extra point kicks either. That’s decided by a one-on-one matchup between wide receivers and defensive backs.

The coin toss is also extinct. The first possession is decided by a duel of "rock, paper, scissors" between captains before the game.

"It’s almost like there’s so many moving parts that I don’t know what’s going on half the time," Toivonen said with a smile. "I just listen to referees and whatever they do I’ll go along with it."

FCF is new and very different, but it is no joke. Especially for players who could potentially get the chance to make the jump to the next level.

"This league is definitely a way for us to get our foot in the door in the NFL or CFL," Toivonen said. "I think that’s what everyone here’s goal is."