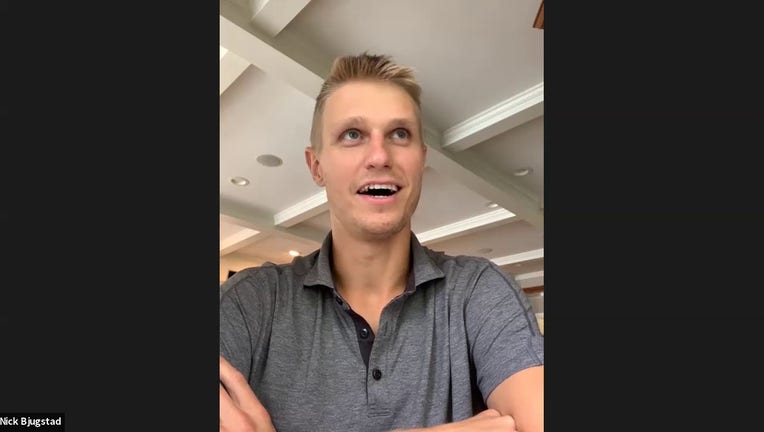 Former Blaine and University of Minnesota star Nick Bjugstad will play for the Wild this season after being traded from the Pittsburgh Penguines for a 2021 draft pick.

He became a father for the second time on Labor Day, with his wife delivering a baby girl. Last Friday, he got a call from his agent. He was coming home to play for the Minnesota Wild after they sent a conditional pick in the 2021 NHL Entry Draft to the Pittsburgh Penguins in exchange for Bjugstad.

The Penguins are also retaining a portion of Bjugstad’s base salary for next season. So when it comes time to get ready for the next NHL season, Bjugstad doesn’t have any packing to do. His new stress will be finding tickets for friends and family.

“Definitely a lot of excitement. New things coming, so I’m definitely grateful for the opportunity and looking forward to joining this team,” Bjugstad said. “This is my stomping grounds. I love it here and I’m just ecstatic about the opportunity.”

Wild General Manager Bill Guerin said Saturday he’s confident bringing Bjugstad in is the right move for the team. He can play center or wing, and Guerin was quick to point out that it’s not simply a happy homecoming, and Bjugstad will have to prove himself.

“Nick definitely has something to prove. He’s motivated, he’s in the last year of his deal and bringing a guy home, there is some risk involved in that. I’m confident that Nick is going to be a professional, this is not a homecoming for him by any stretch. He’s coming here to play for the Minnesota Wild and to help us win,” Guerin said. “That’s what I expect and I know that’s what I’m going to get.”

Bjugstad comes to the Wild after a rough 2019 season filled with injuries. He played in just 13 games and had just two points. He had surgery to repair a core muscle injury last November, and a week into playing, was sidelined again with a lower body injury. In 439 career games, Bjugstad had 97 goals and 110 assists.

While quarantined in late May due to the COVID-19 pandemic, Bjugstad had spinal surgery to repair a herniated disc. In 10 NHL seasons, Bjugstad has played all 82 regular season games once. He played 64 games in the 2018-19 season between the Florida Panthers and Penguins.

He’s used the time in quarantine to heal and workout, and says he’s 100 percent for next season.

“It was challenging. Obviously as an athlete, you do your best to try to take care of your body and I’ve always tried to take pride in that. When things don’t go your way you want them to and your health kind of goes south, it gets a bit frustrating. I like to look at it as more of a learning experience for me,” Bjugstad said. “Definitely motivating for me, I definitely have confidence that I can come in and play a full season here.”

A 6-6, 215-pound center and forward, Bjugstad was the 2010 Mr. Hockey at Blaine after recording 69 points in 30 games. That same year, the Panthers took him with the 19th overall pick. Bjugstad played for three seasons at the University of Minnesota, collecting 98 points in 109 career games. He was named First-Team All-WCHA and a Second Team All-American his final season.

Bjugstad has already talked with fellow Minnesotan and Wild star Zach Parise, who he works out with in the off-season. He’s also spoken with the coaching staff, and to say he’s excited to play for his hometown team is an understatement.

“This is a business, I’m coming in here to try to help the hockey team first and foremost. Obviously it’s a bonus being here in Minnesota around family and friends, but I’m here to take this seriously,” Bjugstad said. “I’ve had pride with the Minnesota Wild, I’ve watched them growing up my whole life so I can’t tell you how excited I am for the opportunity.”