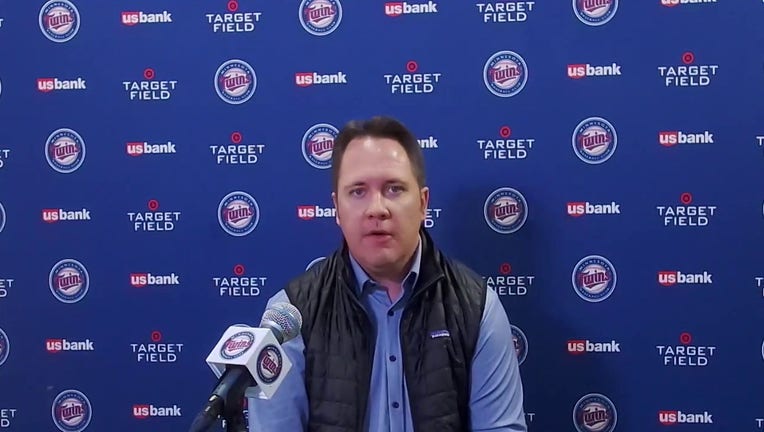 Derek Falvey spoke with reporters Thursday after the Twins were eliminated from the American League Playoffs by the Houston Astros.

MINNEAPOLIS - Derek Falvey woke up Thursday morning and drove to Target Field, but it wasn’t to watch the Minnesota Twins play a winner-take-all Game 3 against the Houston Astros.

The Twins’ season ended Wednesday in a 3-1 loss to the Astros, who swept the series 2-0 and are now moving onto the American League bubble in California. The Twins won the American League Central Division, but for the second straight year, had nothing to show for it.

Falvey addressed reporters on Thursday via Zoom to wrap up the season, and figure out what’s next for the organization.

“This is disappointing sitting here today, there’s no other way around that. We certainly expected to go in and we had a number of goals, even before the pandemic hit and we got shut down, it was a really god team across the board. Had a chance to go ahead and build off what we did last year,” Falvey said. “I didn’t expect to be having this conversation today, no one did. It hit us pretty hard yesterday, we felt this team had a chance to go deeper than we ultimately did.”

The Twins have now lost 18 straight playoff games, a record for all of the four major sports. They’ve lost eight straight playoff series, nine if you include the Wild Card playoff loss to the New York Yankees.

Something has to change, and it’s job of Falvey, the president of baseball operations, to figure that out.

“The emotions of today are real, and the emotions of playing in the playoffs and when you lose are very real, I can promise you that for everybody. I do think there is some reality today that in a baseball season over the course of two, three, four or five games, things can go a little haywire on you, even if you feel like you do have a good base and a good foundation,” Falvey said. “It’s our job collectively to really do a deep dive and understand whether or not there are things that are truly reflective of some of our misses in these postseason games.”

Here’s a sampling of what Falvey addressed about the team Thursday morning.

What’s going on with Byron Buxton?

Byron Buxton was hit in the head by a pitch last Friday night against the Cincinnati Reds. He didn’t play the rest of the series with mild concussion symptoms, worked out at Target Field on Monday and started in center field in Game 1.

He was not in the lineup for Game 2, and the Twins wouldn’t say anything more than he didn’t feel 100 percent. He came into pinch run for Nelson Cruz in the eighth inning, didn’t try to steal second and then was picked off after being caught leaning towards second base. Falvey didn’t offer much of an update Thursday.

“He wasn’t feeling great when he came in. That’s what he said, that’s what we discussed internally and at the end of the day, obviously he’s gone through some challenges more recently. That was kind of the crux of it. I don’t have much more to say outside of that,” Falvey said.

Will Nelson Cruz be back next season?

At 40 years old, Nelson Cruz was the leader for the Twins this season. He hit .303 in 53 regular season games with 16 homers and 33 RBI, and produced the only two Twins’ runs against the Astros with doubles in each game.

The Twins kept Cruz in Minnesota this year after picking up his #$12 million contract option. After the game, Cruz said, “Hopefully I’ll be back next year.”

Falvey said Thursday they want him back.

“We’ve spoken so much about Nellie and what he means to this team, to the guys in that room. Obviously he performed over the last couple of days and was a big part of getting things started for us offensively,” Falvey said. “The feeling is mutual. We don’t feel any different than Nellie does, we see a fit for him here and we’re hopeful that can work out.”

What’s up with Josh Donaldson’s calf?

The Twins’ splash of free agency was signing third baseman Josh Donaldson to a four-year, $92 million contract. The problem for the Twins was Donaldson couldn’t stay healthy this season.

Donaldson played in just 28 of the 60 regular season games, hitting .222 with six homers and 11 RBI. He worked out Monday at Target Field, then was left off the AL Wild Card playoff roster due to ongoing issues with his right calf. The hope was he would play if the Twins got past the Astros, but that option no longer exists.

It’s a disappointing 2020 for Donaldson after hitting 37 homers in 155 games last season.

“When we signed Josh, our hope and expectation was that he was going to be a big part of helping us get to the post-season, but obviously impacting us when we got there. It was disappointing certainly to not have him on the field. Injuries are what they are, when you’re injured you can’t play. That’s just what it is,” Falvey said. “We need to make sure that we get him in a place physically that he can stay and remain on the field. We missed him in the lineup for sure, you could see that over the last couple days.”

Will Alex Kirilloff get more opportunities?

Alex Kirilloff made his big league debut on Wednesday. He’s the first MLB player to make his debut in a playoff game, and offered a glimpse into his potential. With Buxton out, Max Kepler played center and Kirilloff was in right field. He got his first big league playoff hit, and make a diving catch in right center. So will we see him more next season at Target Field?

“I think Alex stepping up and playing yesterday for us when we needed him was a great step. We have to really deeply asses the entirety of our roster,” Falvey said. “We have to be open-minded to making some changes and finding some spots.”

The bottom line for Falvey and the Twins is that they not only have to shape a roster next season that can get them to the playoffs, but keep them there longer than one series.