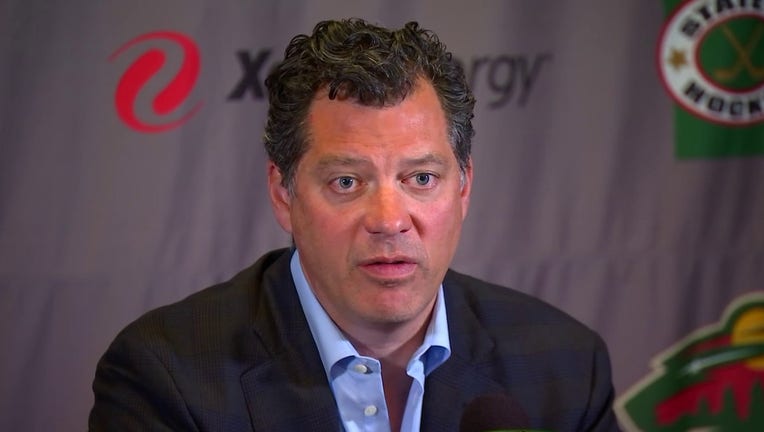 Wild general manager Bill Guerin and coach Dean Evason wrapped up the team's 2020-21 season after losing to the Vegas Golden Knights in the Stanley Cup Playoffs.

MINNEAPOLIS - The last thing Bill Guerin and Dean Evason wanted to do Thursday was have a season-ending news conference.

They’d rather the Minnesota Wild be playing in the second round of the Stanley Cup Playoffs. Their reality now is looking ahead to next season after losing Game 7 to the Vegas Golden Knights last Friday. It’s the fifth straight time the Wild has exited to postseason early. That said, there are plenty of positives from the 2020-21 season to be excited about moving forward.

Wild general manager Bill Guerin and coach Dean Evason wrapped up the team's 2020-21 season after losing to the Vegas Golden Knights in the Stanley Cup Playoffs.

"Extremely disappointed that we’re not still playing hockey. Every season that we go in, our goal is to win the Stanley Cup, that’s it. In that sense, it was a failure. But we had a good regular season and we can build on that," Evason said Thursday morning from team headquarters in St. Paul.

The Wild finished its first full season under Evason 35-16-5 in the regular season, was one of the best home teams in the NHL and finished third in the Honda West. The Wild got down to the Golden Knights 3-1 before forcing a Game 7 that they ultimately lost.

Guerin talked extensively Thursday about the team’s culture changing in a good way, and building around a young corps.

"The most important thing to me are the signs of our team-first mentality, our competitiveness, our dedication. Some of the things that we did are signs of a winning team. Our culture has improved. It’s going in the right direction," Guerin said. "Can I say we’re ahead of schedule? Not really because we got knocked out in the first round, that’s not good enough."

Guerin was asked Thursday what his top priority is this offseason. Without hesitation, he said bringing back Kirill Kaprizov, Joel Eriksson Ek and Kevin Fiala. All could possibly become free agents, but all said in their exit meetings this week they want to be back with the Wild.

The trio was among the team’s top five scorers in the regular season, accounting for a combined 68 goals and 55 assists. That’s 123 points, not including the playoffs. Guerin made it clear the future of the franchise will center around those three.

"We see those guys being here long-term. They’re part of the foundation of this organization and our team. You could see it on the ice, they’re leaders on our team and they provided us with a lot on both sides of the puck."

Kaprizov on Thursday was named a finalist for the Calder Trophy, which goes annually to the NHL’s top rookie. He set franchise rookie records with a team-high 27 goals and 51 points. He had three points in the playoffs. Asked this week about the award, Kaprizov said he’d rather the team wins.

"We love Kirill, I don’t think there’s any secret there on what he’s brought to our team," Guerin said.

"He’s a lot like what we’re trying to build here as a franchise. It’s great to get recognized, but his ultimate goal is to win and to win the Stanley Cup," Evason said.

WHAT ABOUT A TOP LINE CENTER?

The Wild got to the playoffs despite lacking what every Stanley Cup contender seemingly has: A consensus top center. Eriksson Ek was the closest thing to it, but the Wild’s top forwards will only get better with an elite playmaker creating next to them.

Cue the speculation for Jack Eichel, who is rumored to be unhappy with the Buffalo Sabres. Guerin wouldn’t touch that subject, but did say they’ll be on the phones to see what’s available. It also has to be the right deal that makes sense for the long-term future of the Wild.

WILL ZACH PARISE BE BACK?

One of the hot topics this offseason will be the status of veteran winger Zach Parise. He’s got four years left on the 13-year, $98 million deal he signed as a free agent. He’s also coming off one of the toughest seasons of his career, scoring a career-low seven goals in 45 games.

For the second time in his career, he was a healthy scratch in the regular season. He was scratched for the first three games of the playoffs, which he called "brutal" earlier this week and a "sideshow" after Game 7. He got in the lineup after Marcus Johansson broke his arm, and promptly had three points in four games.

"I don’t think it was a sideshow. I’ve been around this league a long time and I’ve seen a lot worse. I think that’s a credit to Zach, he didn’t allow it to become a sideshow," Guerin said. "This is a business, this is not personal. This is not meant to be a soap opera. We don’t subscribe to that stuff, this is business. This is all about winning hockey games, and we’re making difficult decisions every day."

Parise had his ice time cut severely, was not on the power play unit in the playoffs and missed nearly two weeks on the NHL’s COVID-19 list despite never actually testing positive.

Through it all, he remained a professional within the team and in the public eye. He said earlier this week it’s his intention to come to training camp prepared to fight for a spot.

"These guys are all human beings. They all have emotions, they all feel. When you don’t play guys, when you cut ice time, when you healthy scratch them, they’re not happy. We know that, we expect that. We expect them to fight back," Guerin said. "Zach got back in the lineup, we fully wanted him to try to prove us wrong."

On the surface, it's another good regular season followed by an early playoff exit. The Wild hopes it's the start of something much bigger, deeper runs into the postseason led by a highly-skilled young corps and a superstar in Kaprizov. He's a favorite for the Calder Trophy, and Evason could win NHL Coach of the Year in his first full season.

It's a different culture and atmosphere in the locker room, with players saying they want to stay and genuinely enjoying playing together.

"The steps we took as a team were big. For the overall picture, the process that we’re going through to try to build a championship team, the projection is good," Guerin said. "It was disappointing to go out in the first round, but the signs that I see in my seat as a general manager were positive."