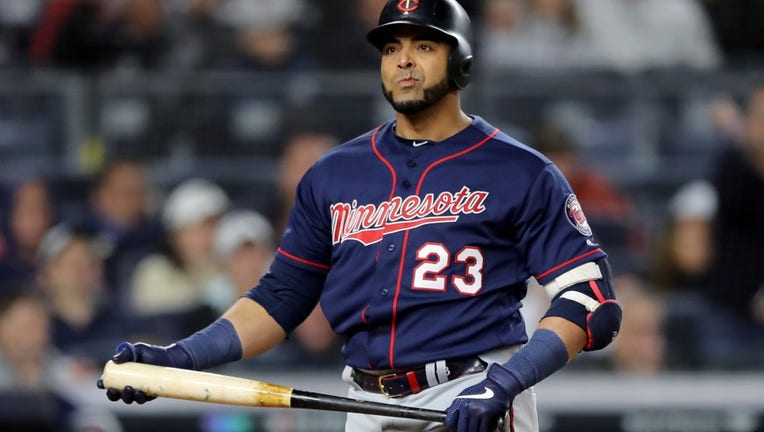 Nelson Cruz #23 of the Minnesota Twins reacts after striking out against the New York Yankees during the seventh inning in game one of the American League Division Series at Yankee Stadium on October 04, 2019 in New York City. ((Photo by Elsa/Getty Images))

MINNEAPOLIS - From color-coding closets to playing dominoes and watching Netflix, Minnesota Twins players are doing whatever they can to stay busy and occupy the time while the Coronavirus pandemic has put the start of the Major League Baseball season on hold.

It’s a reality they’re still coming to terms with, and one they hope is temporary.

The Twins were supposed to be getting ready to hit the West Coast this week to begin a highly-anticipated 2020 season in Oakland and Seattle after 2019 ended with the organization's first division title in 10 years.

Opening Day, a virtual holiday for baseball and sports fans, was supposed to be Thursday for the Twins. Instead, they cleaned out their lockers in Fort Myers, Fla., more than a week ago, and headed their separate ways. What was left of Spring Training was canceled, the season is on hold. They won’t be playing Thursday, and they definitely won’t be opening Target Field in early April.

Twins work to stay focused amid delayed start to the season

Players on the Minnesota Twins are doing their best to prepare for the season, which has been delayed due to the pandemic.

The problem right now is the unknown. They don’t know when the Major League Baseball season will start, or if it will. Taylor Rogers, the Twins' player representative for the union, is most directly involved in those conversations between MLB and the players association. He said Monday it’s likely the regular season goes into October, but it’s hard to know anything when they don’t have a start date.

“It’s difficult because this is uncharted waters and nobody knows exactly what to do. There’s nothing to draw back on,” Rogers said.

Players are home and largely confined to their homes. They get outside to play one-partner catch, do in-home workouts and find other ways to stay busy. Nelson Cruz has a home gym at his residence in the Dominican Republic, which he streamed live on Instagram Monday to give the world a look. He also now takes three naps per day, plays dominoes with his cousin, watches movies and Netflix and just hangs out.

Randy Dobnak makes a brief return to Uber driving to give FOX 9's Jim Rich a ride to his hotel at Spring Training in Fort Meyers, Florida. During the ride, Dobnak shares his best and worst experiences driving with Uber, how he got into driving and how it helped him expect the unexpected on the pitcher's mound. He also shares the story of his rapid rise to the major leagues and his hopes for the 2020 Twins's season.

Cruz, coming off hitting 41 homers last season (third most in his career), is entering his 16th MLB season. For the first time in 20 years, he’s home in the Dominican Republic trying to find ways to stay busy when he should and wants to be getting ready to play baseball.

Rogers is back home in Colorado, a place he hasn’t been the week of Opening Day in 11 years. He gets outside to play catch, from a distance, with fellow Twins prospect Griffin Jax. He does "in-home, prison-style" workouts to stay in shape. They don't know when baseball activities will start back up, but they need to be ready when they do.

He’s also doing chores around the house to stay productive, and calling his teammates every day, whether they like it or not.

“With our younger group, they’re more text messagers and I figure I’d just call them and piss them off now that they have to talk on the phone. We don’t have anything else to do,” Rogers said jokingly. “I think my closet is color-coded at the moment, that’s how bored I am. It is what is.”

He keeps in contact with his family as best he can, but made the decision to stay away from his father, who is a firefighter.

Cruz and Nelson, as well as every other Twins player, is in daily contact with team staff and trainers as Coronavirus continues to delay baseball and every other sport. Trainers check into make sure no players are coming down with symptoms, and team officials check into see how they’re doing.

Nobody in the Twins’ organization has had to be tested for Covid-19, and nobody close to Cruz or Rogers has the virus. The only known cases in MLB are minor league players with the New York Yankees.

The tough reality for now is that there will likely be baseball this year, but it won’t be happening any time soon.

“We’ve just got to get comfortable with the uncomfortable. This is bigger than baseball,” Rogers said.