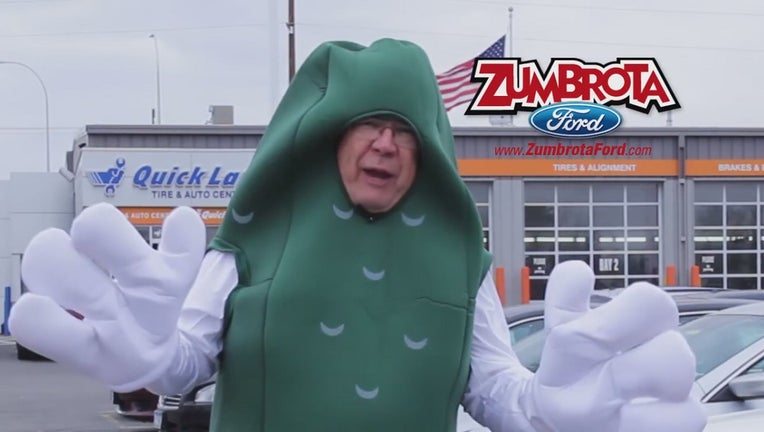 Steve Johnson dons a pickle suit in the ad that is a stunt by comedian John Oliver. (Zumbrota )

ZUMBROTA, Minn. (FOX 9) - A bizarre ad from a southern Minnesota car dealership that's running this week was crafted by the folks behind the popular HBO show "Last Week Tonight with John Oliver."

When it comes to making commercials for his car dealership, Steve Johnson believes "same is lame." Now doing something a little different is putting Zumbrota Ford in the national spotlight.

A bizarre ad from a southern Minnesota car dealership that's running this week was crafted by the folks behind the popular HBO show "Last Week Tonight with John Oliver."

"We did it as a lark," explained Johnson. "We did it to give some exposure for our dealership and it succeeded at that."

During a segment on local car commercials a few months ago, "Last Week Tonight with John Oliver" included a clip featuring Johnson dressed in a pickle suit.

"My doctor told me turn it down a notch before my heart explodes," Johnson said during the ad, hamming it up for the camera.

Oliver then challenged a dealership to produce a spot written by the show's writers. But, the car dealer had to agree to shoot and air it before reading it, and the show chose Johnson's business to do it.

"I was a little worried, but they did make us a promise," explained Johnson. "That what we are going to do is not illegal, not immoral, won't offend anybody. I said OK. With that, we will go ahead and do it."

So, Johnson and a pair of employees created a 90-second spot from Oliver's script about a husband and wife having marriage problems after they bought a minivan. Even though the show wasn’t on Sunday night, it posted a segment featuring the commercial on its website which has racked up more than 1.5 million views so far.

"It's a big deal," said Dorinda Houglum, the dealership's finance director who was featured in the ad. "It's a very big deal. I still don't believe it."

"It's incredible," added General Sales Manager Jared Maes. "The biggest exposure I've been a part of and it's very exciting. Mind-blowing to say the least."

Johnson says the ad will run this week in Rochester. Even though Last Week Tonight put him in a pickle, Johnson says he's glad he took a bite. "None of us were in theater or drama club or anything like that so we are far from professional actors, but we think it turned out OK."