President-elect Joe Biden topped Google’s most-searched list in 2020, ranking in the top 10 according to the company. Those searching on Google about the former vice president were curious about a variety of facts, including his age, height, how he makes his money and even info about his beloved dogs, Champ and Major.

Here are the answers to the most sought after questions about the Democratic lawmaker.

Who is Joe Biden?

The president-elect graduated from the University of Delaware in 1965 with a double major in history and political science. Three years later, Biden attended Syracuse University and earned his law degree, according to History.com.

He got his first taste of public office when he ran his campaign for New Castle County Council. Biden won by 2,000 votes, according to his website.

Biden then went on to become the fifth-youngest person elected to the U.S. Senate at the age of 29.

In the wake of his surprise victory and before he could be sworn into office, tragedy struck when Biden’s wife and 13-month-old daughter, Naomi, were killed after a tractor-trailer hit the family station wagon while they were on their way to pick up a Christmas tree. Both of Biden’s sons, Beau and Hunter, were critically injured.

"Biden was sworn in as a senator from the boys' hospital bedside. While they recovered, he began commuting every day by train from Wilmington to Washington, DC, a practice that he maintained throughout his thirty-seven-year career in the Senate," according to the Miller Center, a University of Virginia affiliate that specializes in presidential scholarship.

Five years later in 1977, Biden would meet his current wife, Jill, with whom he has one daughter, Ashley Blazer.

How old is Joe Biden?

Throughout the 2020 presidential race, Biden faced much scrutiny from his political opponents for his age, given that he turned 78 on Nov. 20 and is the oldest president ever to be in his first term.

Biden will be sworn in as the oldest commander in chief in the nation’s history, displacing Ronald Reagan, who left the White House in 1989 when he was 77 years old.

Where is Joe Biden from?

While Biden is technically a Pennsylvania native, he spent much of his life in Delaware where he graduated from college and eventually moved with his family to work as a lawyer.

When he was elected on the New Castle County Council in 1970, Biden fought "against a massive 10-lane highway project that threatened to pave over Wilmington’s neighborhoods and push back on the oil companies building refineries on the Delaware coast."

How tall is Joe Biden?

Joe Biden is 6-feet tall, according to his IMDB biography.

How many times has Joe Biden run for president?

He first ran for president for the 1988 race, but his campaign was left in shambles after he reportedly plagiarized a speech of British Labor Party leader Neal Kinnock, according to the Miller Center, a University of Virginia affiliate that specializes in presidential scholarship.

Biden also lied about his academic record in college and law school in a New Hampshire campaign appearance, which ultimately led him to withdraw from the race on Sept. 23, 1987, just three months after entering it. 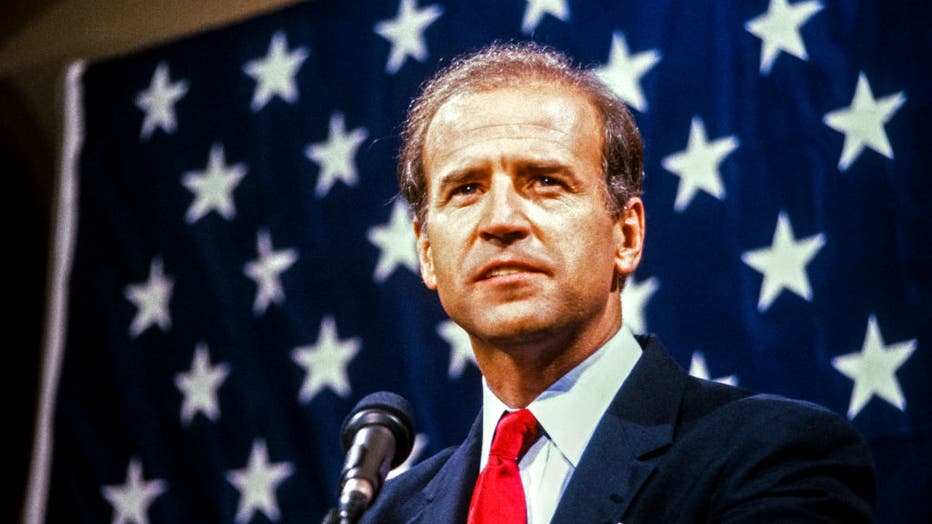 During a press conference, American politician US Senator Joseph Biden announces his intention to run for the Democratic Party nomination's for President of the United States, Washington DC, June 9, 1987. (Photo by Howard L. Sachs/CNP/Getty Images)

He then made a second run for presidency nearly 20 years later in 2008, but withdrew after finishing fifth in the Iowa caucuses, garnering only 1% of the vote.

And on April 25, 2019, Biden once again announced his candidacy for president, which he would go on to win.

An exciting prospect of Biden’s presidency is the fact that dogs will soon roam the White House halls once again.

Major, who was rescued by the Biden family in 2018 will even get his own "indoguration" thanks to the shelter in Delaware from which he was adopted.

The Delaware Human Association says Major is the first-ever shelter pup to become first dog, so they’re planning to "indogurate" him on Sunday, Jan. 17 ahead of his owner’s inauguration on Jan. 20.

The shelter said Major is a "rags-to-riches story that showcases the potential of shelter dogs when they're given a chance through adoption."

How long has Joe Biden been in politics?

Biden has been a political figure since he was first elected to the New Castle County Council in Delaware in 1970.

How much is Joe Biden worth?

In 2019, the Associated Press reported that Joe Biden and his wife, Jill, took in more than $15 million since leaving the Obama White House.

Long fond of describing himself as "Middle Class Joe" while he took in little more than his government salary, the former vice president stressed his working-class roots from the very beginning of his bid for his party’s 2020 presidential nomination.

Federal tax returns and a financial disclosure released in 2019 show that since Biden left public office, his income has surged thanks to a lucrative book deal and constant publicity tours that brought in more than $4 million.

How did Joe Biden make his money?

Since leaving the White House at the end of Barack Obama’s presidency, Biden and his wife signed a multi-book deal with Flatiron Books valued at $8 million, according to Publishers Weekly. Biden’s first book, an account of his son Beau’s death from cancer, briefly topped bestseller lists in 2017. He and his wife have also worked on two other book projects.

Biden earned $540,000 as a professor and namesake of the University of Pennsylvania’s Penn Biden Center for Diplomacy and Global Engagement. Jill Biden made at least $700,000 in her own speaking engagements, the disclosure shows.

Joe Biden’s basic speaking fee was reportedly $100,000 a speech, but his disclosure showed that while some appearances were priced as low as the $40,000 range, others ranged as high as $190,000 for a lecture at Drew University in New Jersey.

Biden’s last financial disclosure, filed in 2016 during his final year as vice president, showed that even after eight years at his $230,000-a-year government salary, Biden held significant personal debt. The 2016 disclosure revealed financial assets worth more than $273,000 — including a $150,000 rental property — and more than $750,000 in debt. Those liabilities included a recent mortgage worth more than $500,000 on the rental property and a recent $250,000 home equity loan.

But much of that debt has been paid off, according to the latest disclosure, which showed only two old loans, each worth no more than $15,000 and dating to the 1980s.

What does Joe Biden stand for?

On abortion: Biden’s 2020 campaign website stated that he would "be a champion for improving access to health care and the health of all by expanding access to contraception and protect the constitutional right to an abortion."

On climate change and the environment: Biden’s 2020 campaign website stated that he would "lead the world to address the climate emergency and lead through the power of example, by ensuring the U.S. achieves a 100% clean energy economy and net-zero emissions no later than 2050."

On COVID-19: Biden outlined his plan on Jan. 15 to control the pandemic which includes mass vaccination centers across the country run by FEMA as he aims to get 100 million shots in Americans’ arms in his first 100 days in office.

On criminal justice and prison reform: Biden said he would "create a new $20 billion competitive grant program to spur states to shift from incarceration to prevention," according to his campaign website.

On economy and jobs: Biden’s campaign website said the president-elect would "mobilize American manufacturing and innovation to ensure that the future is made in America," as part of his manufacturing and technology strategy.

On Education: As president, Biden would "support our educators by giving them the pay and dignity they deserve" via competitive wage and benefits, according to his campaign website.

RELATED: 2020 presidential election: Where Trump and Biden stand on key issues, according to their campaigns

On foreign policy: As president, Biden would "defend our vital interests" and would "never hesitate to protect the American people, including when necessary, by using force," according to his campaign website.

On Health care and mental health: Biden’s campaign website states that he would protect the Affordable Care Act, which was signed into law while he served as vice president, from "continued attacks."

On Immigration: Biden's campaign website states that in the first 100 days his administration would "immediately reverse the Trump Administration’s cruel and senseless policies that separate parents from their children at our border, end Trump’s detrimental asylum policies, and end the mismanagement of the asylum system, which fuels violence and chaos at the border."

On the opioid crisis: If elected, Biden would pursue "a comprehensive, public health approach to deal with opioid and other substance use disorders," his campaign website states.

What religion is Joe Biden?

Biden has framed his presidential bid as a fight for "the soul of the nation," a subtle invocation of the Catholic beliefs that have guided his life.

Biden has used moral language and quoted Pope Francis when discussing other issues that many Catholics do support, such as immigration reform, expanding health care access and tackling climate change.

"My faith teaches me that we should be a nation that not only accepts the truth of the climate crisis, but leads the world in addressing it," Biden wrote in a Religion News Service editorial.

Biden has demonstrated a deep public connection to his faith, dating to the earliest days of his political career. He regularly attends Mass, has met with both Pope Francis and his predecessor Pope Benedict, and credited Catholicism with helping him heal after his son Beau’s death in 2015.