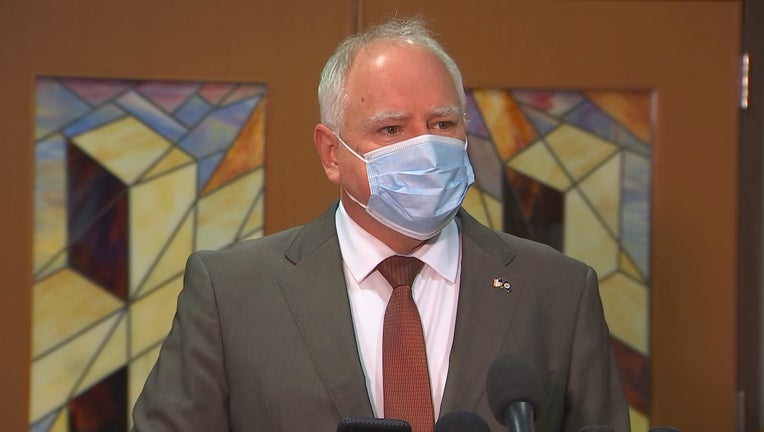 Minnesota Governor Tim Walz gives an update about COVID-19 vaccine distribution during a visit at a senior care facility in New Hope, Minnesota.

NEW HOPE, Minn. (FOX 9) - Gov. Tim Walz's administration is debating how to handle the 11,000 seniors who were waitlisted for a coronavirus vaccine during this week's sign-up period.

At issue: whether the waitlist should be used to fill next week's 6,000 available slots for people 65 and older, or if everyone needs to sign up again when the portal opens at noon Tuesday. As of now, no changes have been made, meaning people on the waitlist must sign up a second time.

Gov. Tim Walz's administration is debating how to handle the 11,000 seniors who were waitlisted for a coronavirus vaccine during this week's sign-up period.

Walz said he is tasking his administration with creating a long-term registry so people can get in a queue instead of having to go online or dial in each week, a process the governor compared with the Hunger Games movie.

"We think it might make more sense to create this central registry, get folks in and in queue, not promising them they’re going to get a vaccine we don’t have, but once we get it, start sending out notices and get them in," Walz told reporters Friday afternoon.

Tuesday, the portal quickly got overloaded and led to a website crash and scores of dropped calls. But by Thursday, anxious seniors were lining up at four vaccine sites and there were no reported issues. Five more vaccine sites opened Friday.

How many have been vaccinated in Minnesota's pilot program?

According to the Minnesota Department of Health, 7,325 Minnesotans have been vaccinated over the past two days under the pilot program.

As of Thursday, Minnesota was 45th in the U.S. in the percentage of allocated COVID-19 vaccine doses used, according to Centers for Disease Control and Prevention data.&nbsp;

This week marked a major shift in Minnesota's vaccination efforts, which to date have focused rigidly on health care workers and long-term care residents. Minnesota health officials had a goal to offer a shot to every health care worker by the end of January, but acknowledge they will not meet that goal.

As of Thursday, Minnesota was 45th in the U.S. in the percentage of allocated doses used, according to Centers for Disease Control and Prevention data.

Minnesota and its partners have given at least one shot to 214,050 people as of Tuesday, and both doses to 49,604 of those people. The reporting lags by three days.

Many states started vaccinating older residents before Minnesota changed course this week. But state officials said Minnesota hasn't had to cancel any appointments for a lack of vaccine, as some others -- including New York -- have.

Health Commissioner Jan Malcolm said Minnesota could get close to vaccinating 3 million people by the end of February if President Joe Biden meets his '100 million shots in 100 days' pledge.

Minnesota has roughly 3.7 million people over the age of 16, and 3 million represents the 80 percent that health officials expect is needed to achieve herd immunity. Vaccines are not approved for people 16 years of age or younger.

Minnesota is scheduled to get 68,000 vaccines for first doses from the federal government next week, in line with the average in recent weeks. At the current pace, it will take more than 4 months to vaccinate the currently eligible group of seniors, educators and child care workers.

"If we get more vaccines in the pipeline, more production out of the ones we have, that’s how we could meet or eventually exceed that pace the president is talking about," Malcolm said.

On Friday, Walz and Malcolm met with staff at Good Samaritan Society-Ambassador in New Hope, a senior care facility where staff and residents are set to get their second doses next week.

Malcolm said all assisted living facilities are on track to get their first and second doses within the next month. The state is doing some vaccinations, while pharmacies are doing the majority through a federal partnership.

Long-term care facilities were hammered by the virus throughout 2020, with a majority of the state's deaths occurring among residents.

Kim Stoltzman, the New Hope facility's director of nursing, said a high percentage of staff took the vaccine offered to them. Many of those who were hesitant are now signed up to get their first shot next week, she said.

"We’ve all done fine. None of our staff had really side effects to the first dose," Stoltzman said. "COVID spreads so quickly that if you get one case in here, it's really unnerving to know are we going to have another one and another one, once there’s one case in the building. So the fact we’re COVID-free is a huge milestone right there."