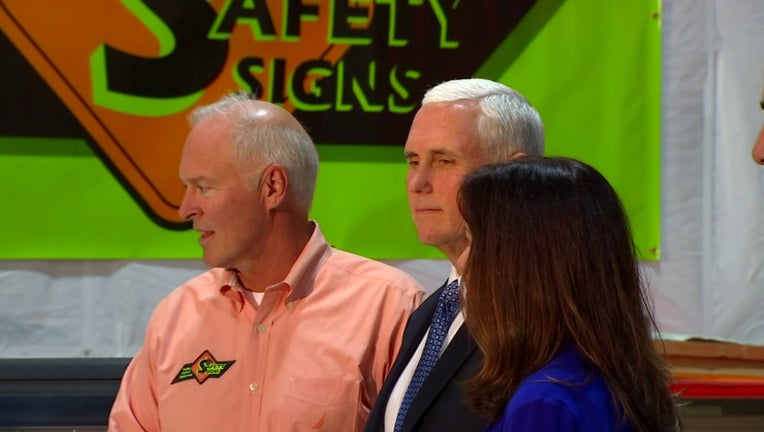 MINNEAPOLIS (FOX 9) - Vice President Mike Pence arrived into the metro a bit ahead of President Trump on Thursday to make a quick stop before the president’s rally in Minneapolis.

The stop highlighted how important the Trump campaign is treating Minnesota ahead of the 2020 election.

Vice President Mike Pence arrived into the metro a bit ahead of President Trump on Thursday to make a quick stop before the president’s rally in Minneapolis.

The vice president, joined by his wife, touched down in Minnesota around 3:30 p.m. From the airport, the couple stopped by Safety Signs in Lakeville, Minnesota for a tour of the factory. The company specializes in making, as the name suggests, safety signs for work zones and roadway construction.

Inside the meet and greet, the VP met with an intimate group of about 80 Safety Signs employees. Making brief comments that lasted only about seven minutes, the vice president touched on the low unemployment rate, rising wages, and mainly the strong economy.

Pence also took time to push the importance of the United States-Mexico-Canada Trade Agreement getting to the Congress floor for a vote.

"We’re gathering in a place with a motto of whatever it takes, with tighter deadlines, Safety Signs is getting busier, with this buzzing economy, and I couldn’t be more proud to serve alongside this president from the first day, working to get the economy in Minnesota moving and America moving."

As we know, this visit is part of trying to flip the second Congressional district back to Republican control. Jason Lewis was among the small crowd. Lewis was defeated by Congresswoman Angie Craig last year.