U.S. Coast Guardsmen prepare to conduct a visit, board, search and seizure aboard the guided-missile cruiser USS Monterey in the Arabian Sea on May 6, 2021. Credit - U.S. Navy photo by Mass Communication Specialist Seaman Chelsea Palmer

The U.S. Navy said it seized a massive cache of illicit weapons, including thousands of assault weapons, machine guns and sniper rifles, from a stateless vessel sailing in international waters of the northern Arabian Sea. The arms were apparently bound for Yemen to support the country's Houthi rebels, according to the Associated Press.

The U.S. Navy’s Fifth Fleet said in a statement Saturday that the guided-missile cruiser USS Monterey stopped the dhow on May 6 and discovered the cargo during a routine boarding operation.

Photo and video showed the huge weapons haul covering part of the flight deck of the ship during the two-day operation. 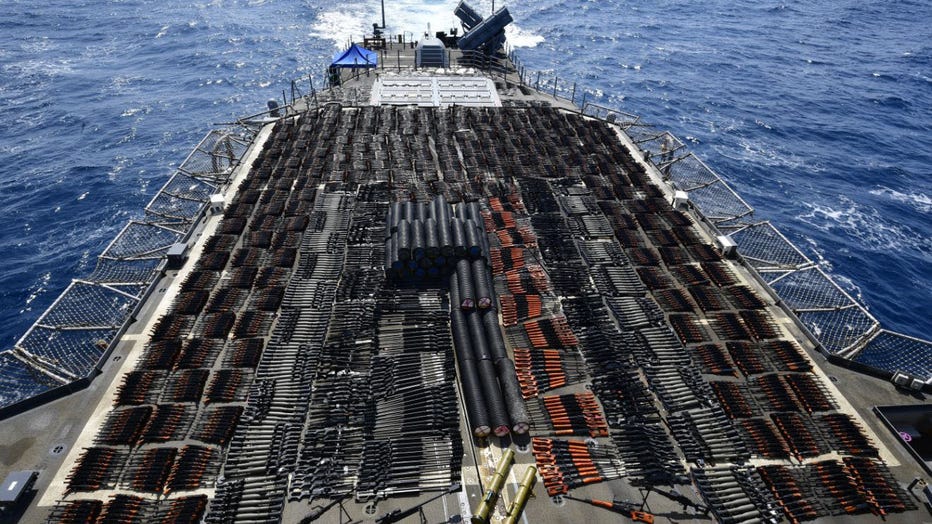 Thousands of illicit weapons are pictured the deck of the guided-missile cruiser USS Monterey on May 8, 2021. (Photo credit: U.S. Navy)

The seized weapons are in U.S. custody. The statement did not identify where the weapons originated, nor where they were going. However, an American defense official said the weapons resembled those of other shipments interdicted bounded for the Houthis.

The statement said U.S. Navy’s regular patrols in the region aim to "disrupt the transport of illicit cargo that often funds terrorism and unlawful activity."

An American defense official told The Associated Press that the Navy's initial investigation found the vessel came from Iran, again tying the Islamic Republic to arming the Houthis despite a United Nations arms embargo. Iran's mission to the U.N. did not immediately respond to a request for comment, though Tehran has denied in the past giving the rebels weapons.

The seizure, one of several amid the years-long war in Yemen, comes as the U.S. and others try to end a conflict that spawned one of the world's worst humanitarian disasters. The arms shipment, described as sizeable, shows that the war may still have far to run.

The Monterey was in operation for more than 36 hours, providing security for its boarding teams — which included the U.S. Coast Guard Advanced Interdiction Team — throughout the two-day operation, the Navy said.

"After all illicit cargo was removed, the dhow was assessed for seaworthiness, and after questioning, its crew was provided food and water before being released," the statement added. A dhow is a traditional Mideast sailing ship.

The seizure marks just the latest in the Arabian Sea or Gulf of Aden involving weapons likely bound to Yemen. The seizures began in 2016 and have continued intermittently throughout the war, which has seen the Houthis fire ballistic missiles and use drones later linked to Iran. Yemen is awash with small arms that have been smuggled into poorly controlled ports over years of conflict.

Yemen’s war began in September 2014, when the Houthis seized Sanaa and began a march south to try to seize the entire country. Saudi Arabia, along with the United Arab Emirates and other countries, entered the war alongside Yemen’s internationally recognized government in March 2015. Iran backed the Houthis, who harass Saudi Arabia with missile fire and drone attacks.

The war has killed some 130,000 people, including over 13,000 civilians slain in targeted attacks, according to the Armed Conflict Location & Event Project.

The war has seen atrocities from all sides. Saudi airstrikes using American-made bombs killed schoolchildren and civilians. The UAE paid off local al-Qaida fighters to avoid fighting and controlled prisons where torture and sexual abuse was rampant. The Houthis employ child soldiers and indiscriminately lay landmines.

Since 2015, the U.N. Security Council has imposed an arms embargo on the Houthis. Despite that, U.N. experts warn "an increasing body of evidence suggests that individuals or entities in the Islamic Republic of Iran supply significant volumes of weapons and components to the Houthis."