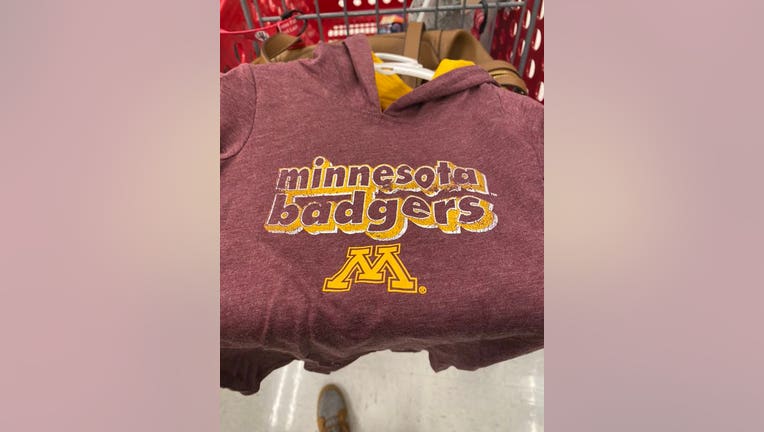 A customer came across a maroon and gold onesie with "Minnesota Badgers" printed on the front at the Target store in northeast Minneapolis over the weekend. (Kileigh Carpenter / FOX 9)

(FOX 9) - A photo of a maroon and gold baby onesie with the words “Minnesota Badgers” printed on it that was being sold at a Target store near the University of Minnesota campus is going viral.

If you’re asking what the big deal is, well, the U of M’s mascot is the Gophers…and the Wisconsin Badgers just happen to be their biggest rival. Target, a Minnesota-based company, should know that.

Kileigh Carpenter, who identifies as a “proud #UMN alum” came across the onesie at the Target store in northeast Minneapolis. She posted a photo of the item to Twitter on Sunday with the caption, “What is this @Target?”

Carpenter shared Target’s response with FOX 9. The retailer did not have an explanation for how the product ended up on the sales floor, but said its merchandising team is following up with the manufacturer. In the meantime, team members have removed all the onesies from the racks at that store.

The incident led some Twitter users to speculate if there is a similar “Wisconsin Gophers” shirt at a Target store somewhere in Madison, Wisconsin.

According to Target, the mascot mistake was due to a vendor mishap. There were 24 onesies produced, 22 of which were removed from the shelves. It only affected four locations.