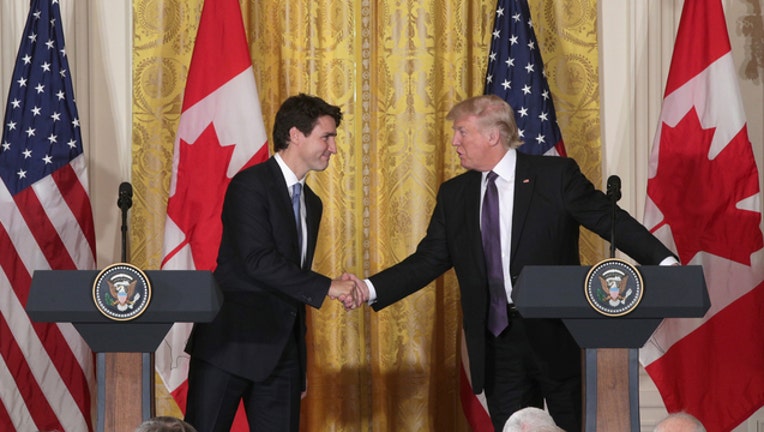 US President Donald Trump and Canadian President Justin Trudeau participate in a joint news conference in the East Room of the White House on February 13, 2017 in Washington, DC. (Photo by Alex Wong/Getty Images)

WASHINGTON - President Donald Trump warned Canada on Saturday that it "will be out" of a revised North American trade agreement unless it's "fair" to the United States, and he threatened to scrap the current deal should Congress "interfere" with the negotiations.

"There is no political necessity to keep Canada in the new NAFTA deal," Trump said in one of a series of tweets as he visited his Virginia golf club while three former presidents and a range of political dignitaries attended a Washington memorial for John McCain. Trump wasn't invited.

But it's not clear whether the Trump administration has the authority to strike a deal with just Mexico, as it announced Monday, and exclude Canada. Also, Congress must approve any rewrite of the North American Free Trade Agreement , signed under President Bill Clinton, and might refuse to endorse a deal that leaves longtime ally Canada on the sidelines.

Talks to keep Canada in the trade bloc are to resume this coming week as Washington and Ottawa try to break a deadlock over issues such as Canada's dairy market and U.S. efforts to shield drug companies from generic competition.

"As we've said all week, we're working toward a modernized NAFTA that is good for the middle class and people working hard to join it," said Adam Austen, a spokesman for Canadian Foreign Minister Chrystia Freeland. "With good will and flexibility on all sides, a win-win-win outcome is achievable. Canada, of course, will only sign a deal which is good for Canada."

Trump notified Congress on Friday that he plans to sign an agreement in 90 days with Mexico to replace NAFTA and hopes Canada can brought on board, too. Congress would have to approve any agreement.

"There is no political necessity to keep Canada in the new NAFTA deal. If we don't make a fair deal for the U.S. after decades of abuse, Canada will be out," Trump tweeted. "Congress should not interfere w/ these negotiations or I will simply terminate NAFTA entirely & we will be far better off..."

Earlier, he said he loved Canada, but says "they've taken advantage of our Country for many years!"

A U.S.-Mexico deal sealed on Monday excluded Canada. Freeland then hurried to Washington for talks aimed at preserving Canada's membership in the regional trade agreement.

But Freeland couldn't break an impasse in four days of negotiations with U.S. Trade Representative Robert Lighthizer. American and Canadian negotiators will return to negotiations Wednesday.

The talks had taken an odd turn for the worse Friday over news that Trump had told Bloomberg News that he wasn't willing to make any concessions to Canada.

The 24-year-old NAFTA tore down most trade barriers dividing the United States, Mexico and Canada. Trade between the three countries surged. But many manufacturers responded to the agreement by moving factories south of the border to take advantage of low Mexican wages, then shipping goods north to the United States and Canada.

Trump has charged that the deal wiped out American factory jobs. He has pledged to negotiate a better deal or withdraw from NAFTA altogether. Talks on a new trade deal started a year ago but bogged down over U.S. demands, including some meant to return manufacturing to the United States.

A few weeks ago, the United States began negotiating with Mexico, leaving Canada on the sidelines. Outgoing Mexican President Enrique Pena Nieto wanted to sign a deal before he left office Dec. 1. The deal announced Monday would, among many other things, require that 40 percent to 45 percent of a car be made in a North American country where auto workers made at least $16 an hour — that is, not in Mexico — before qualifying for duty-free status.

Canada doesn't have much of an objection to the auto provisions of the U.S.-Mexican deal, which would benefit Canadian workers too. Ottawa does have other complaints. Neither U.S. nor Canadian negotiators are talking publicly about the issues that divide them.

Experts have said the flashpoints include trade barriers that protect Canadian dairy farmers and Ottawa's insistence on keeping NAFTA provisions for resolving disputes.

Also nettlesome is a provision in the U.S.-Mexico deal that shields U.S. makers of biologics — ultra-expensive drugs produced in living cells — from generic competition for 10 years instead of the eight Canada is willing to live with: The Canadians fear the protection will drive up drug prices and make their government health care system more costly.

The Trump administration had insisted that it wanted a deal by Friday, beginning a 90-day countdown that would let Mexico's Nieto sign the pact before leaving office.

But under U.S. trade rules, the U.S. team doesn't have to make public the text of the revamped agreement for 30 additional days, buying more time to reach a deal with the Canadians.