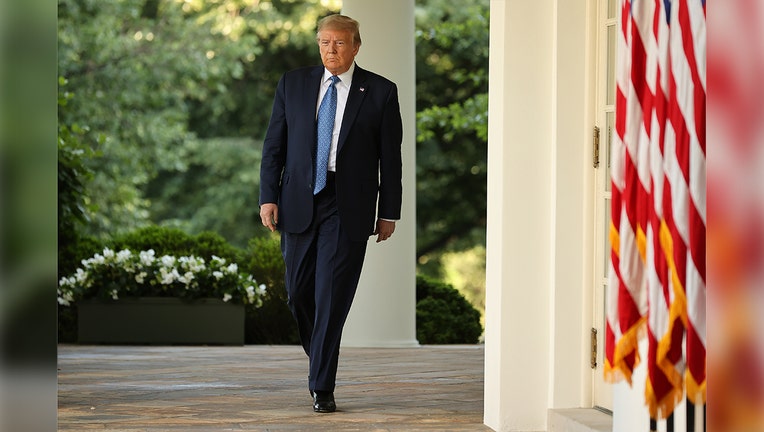 WASHINGTON, DC - JUNE 01: President Donald Trump walks out of the White House to make a statement to the press about restoring "law and order." Earlier in the day, he encouraged governors to be more aggressive against violent protesters following sev (Chip Somodevilla)

RALEIGH, N.C. - President Donald Trump says he is seeking a new state to host the Republican National Convention after host North Carolina refused to guarantee the event could be held in Charlotte without restrictions because of ongoing concerns over the coronavirus.

Trump tweeted the news Tuesday night, complaining that the state's governor, Democrat Roy Cooper, and other officials "refuse to guarantee that we can have use of the Spectrum Arena" and are not "allowing us to occupy the arena as originally anticipated and promised."

Trump says the party is "now forced to seek another State to host the 2020 Republican National Convention," Trump wrote.

The president first brought up moving the RNC back in May when other states began relaxing regulations put in place to prevent the spread of COVID-19, but North Carolina's stay-at-home orders remained.

MORE: Governor DeSantis says Florida would love to host the RNC if President Trump pulls it out of North Carolina

The governors of several states quickly offered to host the convention, including Florida Governor Ron DeSantis, but Trump rejected the idea of having the convention in his new home state.

It was still unclear Tuesday evening what state(s) the president and the Republican Party was considering for the convention.

The Associated Press, FOX 35 Orlando, and FOX 13 News contributed to this report.