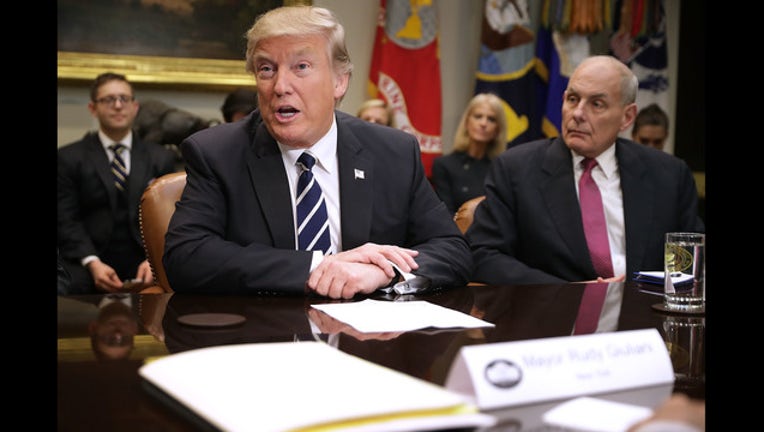 After months of speculation about Priebus' fate, Trump tweeted the decision just as he landed in Washington after an event in New York in which he lavishly praised Kelly's performance at Homeland Security.

P:riebus, the former Republican National Committee head, was the frequent target of rumors about his job security, the victim of a long whisper campaign by Trump allies and the subject of a remarkable public rebuke this week by the new White House communications director.

Trump's announcement on Twitter: "I am pleased to inform you that I have just named General/Secretary John F Kelly as White House Chief of Staff. He is a Great American ... and a Great Leader. John has also done a spectacular job at Homeland Security. He has been a true star of my Administration."

He also saluted Priebus, the chief of staff he had just pushed out.

"I would like to thank Reince Priebus for his service and dedication to his country. We accomplished a lot together and I am proud of him!"

Speaking to reporters on the tarmac at Joint Base Andrews outside Washington, Trump said: "Reince is a good man. John Kelly will do a fantastic job."

Priebus never could bring a semblance of order to the team of in-fighting rivals that populate Trump's West Wing, and questions about his future have long swirled around the office. Those questions sharply escalated this week with the arrival of Anthony Scaramucci, the hard-charging communications director who was hired over Priebus' objections.

Priebus' already tense relationship with Scaramucci took a darker turn over the past two days when the communications chief suggested in a late-night tweet that Priebus was one of the "leakers" that Trump has railed against. The New Yorker published an interview Thursday in which Scaramucci called Priebus, amid an avalanche of vulgarity, a "paranoid schizophrenic"

Both Scaramucci and Priebus traveled to New York's Long Island with Trump on Friday for an event where the president highlighted efforts to crack down on the gang MS-13. Priebus took the return flight to Washington, his fate sealed in the tweets that were sent by the president just as he stepped off the plane. Priebus did not respond to reporters' shouted questions.

From day one, Priebus' power has been limited compared with past officials with his title. In a highly unusual arrangement, Trump said at the outset that Priebus and chief strategist Steve Bannon would serve as "equal partners" in implementing his agenda.

Priebus, who hails from Wisconsin and has deep ties House Speaker Paul Ryan, had grown increasingly isolated in the White House, as past Republican National Committee colleagues and other allies have left or been pushed out of the West Wing. Those who have departed include former deputy chief of staff Katie Walsh, outgoing press secretary Sean Spicer and press aide Michael Short.

Scaramucci was the latest top aide to be granted a direct line to Trump, and it became increasingly unclear who actually reported to Priebus.