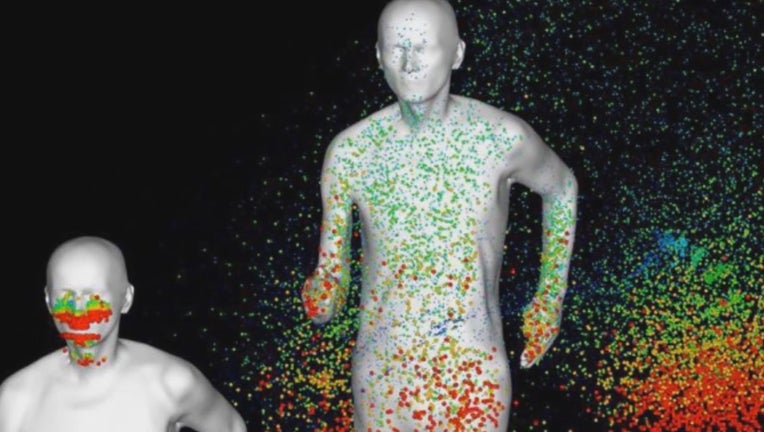 Models from research by Professor Bert Blocken of Eindhoven University of Technology show particles may travel farther distances during exercise.

(FOX 9) - Six feet is supposed to be the new social distancing norm, but is it far enough?

A physicist in Belgium believes it may be too close depending on the nature of the physical activity.

Too close for contagion?

Six feet is supposed to be the new social distancing norm, but is it far enough? &nbsp;

“The research is watertight, it’s not rocket science,” said Professor Bert Blocken of Eindhoven University of Technology in the Netherlands.

It is not rocket science, or even virology that Blocken studies, but rather aerodynamics.

This particular research, he said, involved wind tunnel experiments that were confirmed through computer modeling.

Blocken studied how aerosolized water vapor would travel from people exhaling while walking, running, and biking.

He discovered people leave behind a water vapor cloud during exercise that extends beyond six feet, called a slipstream, that others following could walk through.

“These droplets are very light,” said Blocken. “They will not move along with you when you are running or cycling. They will come to a standstill almost immediately and you will leave them behind.”

Walking side by side, a few feet apart, there’s actually less risk than following directly behind someone in their slipstream, he said.

If you are directly behind someone who is walking quickly, you should follow at least 15 feet behind them to avoid their slipstream, according to his research.

If someone is running directly ahead, allow 33 feet. And if a cyclist is ahead, he recommends allowing 65 feet.

“If someone else is running or cycling behind you at a close distance, they will actually walk right through this cloud of droplets,” said Blocken.

He says you can also avoid the slipstream by simply stepping to the side and passing at a safe distance of six feet. Wind and humidity can also be a factor, he admits.

Prof. Blocken’s research has already gone viral, picked up in newspapers and web sites across the world, even though it hasn’t been published in an academic journal or gone through peer review, which can take months. He said it was too important to wait.

But experts in virology and epidemiology have cautioned there may be many factors and variables at play, including the amount of virus that would be in a water droplet, known as the viral load.

But a recent study of an ICU ward in Wuhan, China, published by the Centers for Disease Control (CDC), found aerosolized COVID-19 virus up to 13 feet away, on computer mouse pads, trash cans, and hand rails.

“I tell them better safe than sorry,” said Blocken.