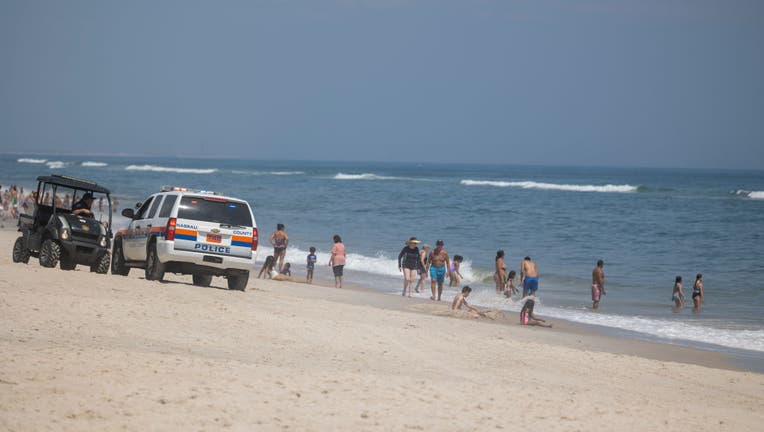 Town of Oyster Bay Constable with public safety and the Nassau County Police keep an eye on the waters off Tobay Beach for sharks on July 14, 2022 in Massapequa, New York. (Photo by Howard Schnapp/Newsday RM via Getty Images)

Recent shark sightings and attacks across the Northeast have some beaches on high alert, but marine experts say there might be a silver lining behind the increase in activity.

At least five people, including two lifeguards and a surfer, suffered bites from these giant fish over the past month along New York beaches.

Bradley Peterson, a professor of marine science at Stony Brook University, told FOX Weather that the sightings could be the result of conservation work.

"I think what you’re seeing is the result of some really excellent resource management strategies that have increased not only the shark populations somewhat modestly but also their prey. So this is really a success story for conservation in the ocean, going along the south shore of Long Island," Peterson said.

In addition to the efforts, water temperatures across large parts of the Western Atlantic are well above average, which could be impacting activity levels.

Marine experts say sharks are usually more active in warmer waters as they search for prey.

Big schools of bunker fish have recently been spotted along the coast, which are usually a signal that a shark maybe not too far behind.

"When you see these bunker schools move by, you may just want to, you know, step out of the water and enjoy the view as they go by and then go back in because those sharks are only going to be attracted to their food," Peterson said.

The National Oceanic and Atmospheric Administration estimates the East Coast is home to more than 50 species of sharks that range in size from small dogfish to the infamous great white.

Most spend their time well offshore in the deep waters of the Atlantic, but a few dozen times a year, encounters do result in a shark attack.

According to data from the University of Florida, most of these incidents involve surfers or other sporting activities that take place in deeper waters and involve a lot of splashing and paddling.

STAY SHARK SMART: WHAT TO KNOW WHEN YOU HEAD INTO THE WATER

There are plenty of actions swimmers can take to try to avoid an accidental encounter with marine life.

Peterson suggests avoiding getting in the ocean during the early morning or late evening and staying clear of schools of fish.

"They’re there to feed on the bunker. If they bite you, it’s by accident because they were going after fish," Peterson said.

Most of the attacks result in non-life threatening injuries and swimmers usually make a full recovery.

The National Safety Council puts the odds of being fatal shark attack at around 1 in 3,748,067, meaning your chances of death by heart disease, lightning or fireworks is much higher.