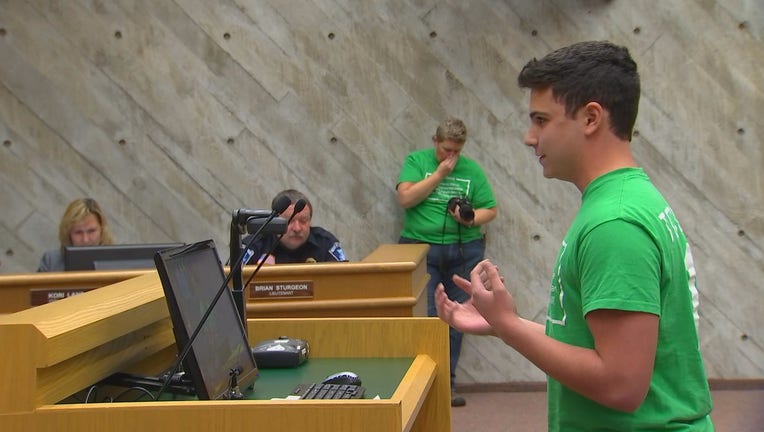 Students are taking issues of vaping among their peers into their own hands, taking a stand in front of city governments in support of stricter vaping laws.

(FOX 9) - For weeks, we've heard from doctors, parents and government officials about the vaping epidemic. Now, as one Minnesota city hears from the teens at the center of it all, another city joined 50 others in raising the tobacco sale age to 21.

David Skadron is a junior at Henry Sibley High School in West St. Paul. He spoke out during Monday night's city council meeting to urge city leaders to pass Tobacco 21, an ordinance that raises the sales age to 21 years old.

For weeks, we've heard from doctors, parents and government officials about the vaping epidemic. Now, as one Minnesota city hears from the teens at the center of all, another city joined 50 others in raising the tobacco sale age to 21.

“I’m watching my peers become addicted to nicotine because vapes are so easy to get,” Skadron said.

Skadron and his friends described how rampant vaping is inside their school.

“Most days, you can smell in the hallways the scent of the different vapes…bathrooms have become vape rooms where people can go and vape,” he said.

West St. Paul joined Golden Valley to enact some of the most progressive policies to tackle the epidemic of vaping and e-cigarette use. Golden Valley city officials even went so far as to reduce the number of licenses they hand out to pharmacies and retailers in the city in order to cut down on nicotine use, including major chain stores.

“In particular, not looking to renew the licenses of pharmacies that sell tobacco… we think their focus ought to be on keeping people healthy,” said Golden Valley City Councilman Larry Fonnest.

But, several local business owners are concerned that this move could shut them down and drive business to nearby communities who still allow menthol and other products to be sold.

"As local retailers, we have been the punching bag of this issue from day one," said Gretchen Wienke, manager of Golden Valley Liquor Barrel.

Wednesday night, West St. Paul will hold a second public hearing to raise the tobacco sale age to 21. They are set to take a final vote next week.