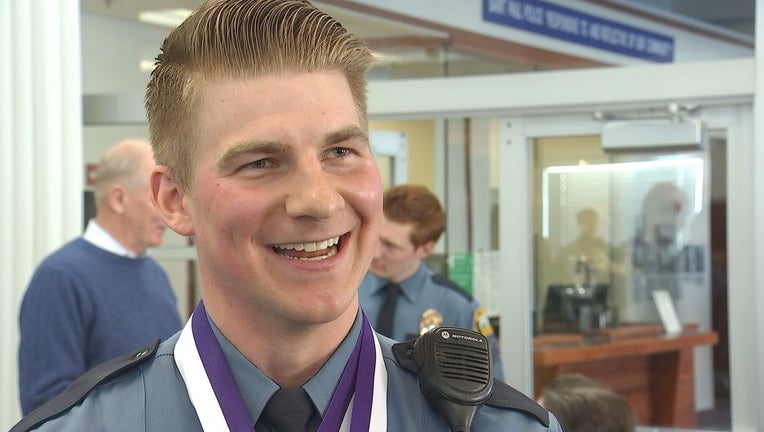 ST. PAUL, Minn. (FOX 9) - Police officers in St. Paul who went beyond the call of duty to save a life were recognized during an award ceremony on Thursday.

Each year, Chief Todd Axtell recognizes officers for acts of bravery and quick-thinking.

Police officers in St. Paul who went beyond the call of duty to save a life were recognized during an award ceremony on Thursday.

Zachary Schoen has only been a St. Paul police officer for three years, but now he is being credited with saving two lives in as many weeks.

"It's nice to be recognized for work, but it's not the reason we show up for work every day," said Schoen.

Schoen was one of four officers who were called to break up two men who were fighting in the street near Payne and York early one morning last September.

When they arrived, they found one of the men had been shot in the leg was losing a lot of blood. So Schoen put his finger in the bullet hole to stop the bleeding until his partner packed the wound with gauze and paramedics were able to get the man to the hospital.

"I had been through some training on Allina ambulance that had shown us how to do some of those things," he explained. "So, I had some practice in training scenarios but never in real life."

A week later: another call, another gunshot wound. This time, a man had been shot in the stomach at a family gathering in the 800 block of Hazel Street. Police say Schoen packed the wound while his fellow officers performed CPR until they got him breathing again.

"Unfortunately, we respond to more reports of people shot than we would like," Schoen said.

Schoen received a pair of medals and certificates, but being there for his community is what means the most.

"We show up to make a difference and I was glad I was able to do that for these two people," said Schoen.